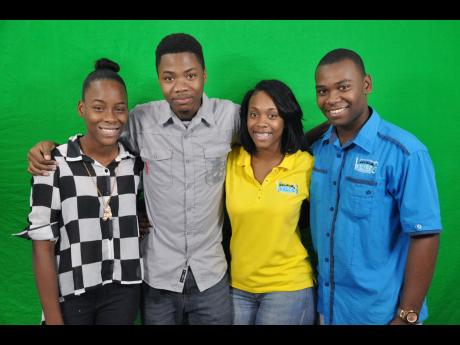 Jermaine Barnaby
From left: Inzingah McCarthy, a member of the second-place winner from the SINGCH group; Carlton Gordon, participant in the Hack Gen Y 2015 competition, along with Chawnte Johnson, sponsorship manager, Vybz Media Group, and Jadan Johnson, CEO of Vybz Media group, at The Gleaner on Saturday.

STATE MINISTER for Technology Julian Robinson was left blown away by the successful execution of the first staging of the Hacking Generation Y Hackathon, hosted by the Vybz Media Group, in association with other sponsors, at the Start Up Jamaica headquarters in downtown Kingston.

"What I was very impressed with was the ideas and solutions that came out of the 30-hour hackathon, as many of them were real-world problems that could have a great impact," said Robinson.

He added: "This confirms that there is an enormous amount of talent here in Jamaica that requires mentorship, support and access to funding."

Robinson said 16-year-old Jadan Johnson, CEO of Vybz Media Group, is a perfect example of the wealth of young talent in the island.

The winners of the competition were a group of Jamaica College students, ages 15 to 17, who go by the name Code Veterans.

They developed a web-based application called Future Seed that allows a smooth process for career selection.

However, the application that stood out to Robinson was the second-place app called Blind Sight for the Pebble Smartwatch, which helps the visually impaired and was developed by Team SINGCH.

"I wanted to be a broadcaster, but since the event, I am really considering computer science," said 14-year-old Inzingah McCarthy, a member of the SINGCH group and a student at St Hugh's High School.

"I actually started learning JavaScript like a week before the competition, as my mother does programming and my father does the hardware aspect, and with their encouragement, I'm actually glad my group got involved. Now I feel that this is a pretty cool area," she added.

Blind Sight is an update to the Pebble Smartwatch for the visually impaired that helps to guide them to their destination. A user would voice input into their Android or Apple smartphones and that voice command would then convert to text the location where the person is going, send it to Google maps, which fetches the direction and sends it back to the phone.