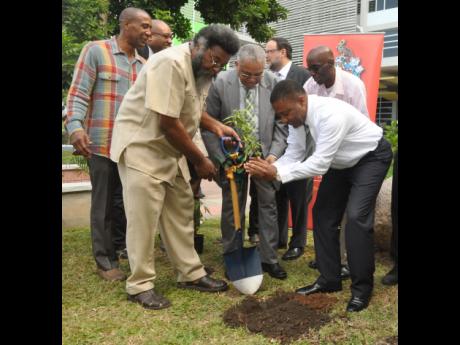 Principal of the University of the West Indies (UWI), Professor Archibald McDonald, has moved to quell fears that the decriminalisation of marijuana will result in an increase in the number of emergency medical cases at hospitals in Jamaica.

Speaking during a ceremony surrounding the symbolic planting of Jamaica's first legal cannabis plant at the UWI, McDonald, who is a medical doctor by training, argued that the use of alcohol and cigarettes is far worse than ganja in terms of their deleterious effects on health.

The planting of the cannabis plant coincides with the granting of licences by the Government to the UWI and the University of Technology (UTech) that will allow them to cultivate marijuana for research purposes.

Empowered by the licence, McDonald has said the UWI will do the necessary research that will provide the scientific basis for the belief that ganja can be effective in combating a range of diseases.

Psychosis a side effect

McDonald further reasoned that the psychosis associated with the use of the plant can be classified as a side effect.

"There is no medication without side effects, so if there is the odd case of psychosis, I'm prepared to accept that," he said.

He passionately dismissed fears that hospitals will be flooded by persons suffering from psychosis.

"I want to state categorically, as the person who invented emergency medicine in Jamaica, that it is total nonsense to say that dozens of people will be going to hospitals to be treated for psychosis as is being said in some quarters," he added.

McDonald's call comes a week after Minister of Education Ronald Thwaites raised alarm in Parliament that at least two students were taken to hospital for symptoms of psychosis after smoking marijuana on the day possession of weed was officially decriminalised.

Cops must use discretion

Meanwhile, McDonald called for the police to use their discretion in issuing tickets to persons found in possession of more than two ounces of ganja.

"Let us hope that the police will use their discretion even before we make it fully legal to have small quantities. There is no need for anyone to be harassed for a small quantity of ganja unless you are going to do the same for a single cigarette, and I am asking [National Security Minister Peter Bunting] to have words with [Police Commissioner Dr Carl Williams] about this," he said.