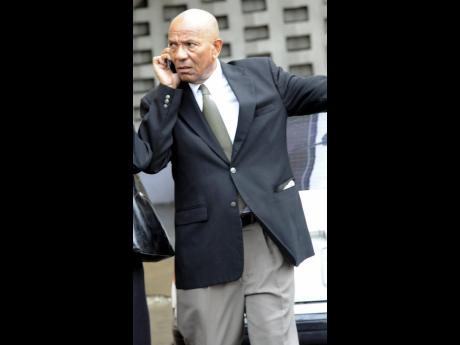 A Supreme Court judge has reaffirmed the constitutional bar against Jamaican prosecutors appealing not-guilty verdicts in criminal cases in its formal rejection of the bid by Gordon 'Butch' Stewart's company, Gorstew, to get a judicial review of the acquittal of three former executives it accused of fraud.

At the same the time, Justice Carol Lawrence-Beswick not only questioned the logic of Gorstew attempting to gain the review in the absence of support from the Director of Public Prosecutions (DPP) - a fact that she said would be likely to lead to the wasting of the court's time - but also held that the executives, Jeffrey Pyne, Patrick Lynch, and Catherine Barber, were improperly made respondents to the application.

Pyne had formerly been managing director of Gorstew. Lynch had recently retired as the company's chief financial officer, and Barber was manager of the group's pension scheme when they were arrested in December 2010, allegedly for fraudulently causing the distribution for cash surpluses in the pension fund. Midway in a magistrate's court trial, the charges were amended, the prosecution conceded, to make clear that no money had left the fund and the defendants gained no undue benefits, but had concocted a scheme to make the distributions.

Gorstew operated a defined contribution pension scheme, which, in theory, means that its members are guaranteed no defined benefit at retirement but get pensions based on the performance of the scheme's investments. However, this scheme's rule required its founder, Gorstew, to approve distributions, which the company claimed was accomplished, covering several years, by Pyne signing authorising letters after he had left the company and Lynch and Barber putting them into effect.

The case was largely prosecuted by private attorneys, hired by Gorstew, on the basis of a fiat, issued by the DPP. But last June, Resident Magistrate Lorna Shelly-Williams threw out the charges on the basis of a no-case submission by defence lawyers.

Gorstew, however, sought judicial review of the verdict, primarily on the basis of a claim that the magistrate, in delivering her judgment, had said she needed more time to go through the evidence and that it was a work in progress, which "amounted to a jurisdictional error, rendering her findings null and void and of no effect".

They also sought a declaration that the verdict was "so unreasonable that no tribunal properly directed in the law and having considered all the relevant evidence" could have arrived at it.

But the judge upheld the preliminary point and the magistrate was both misquoted and taken out of context, saying that "it defies logic that a resident magistrate would deliver a decision in a matter and at the same time say that she was still working on coming to the decisions".

But even if she was wrong on that conclusion, Lawrence-Beswick held, there was still the fundamental issue that allowing the review to go ahead would be "an exercise in futility" because of the constitutional bar on the prosecution's ability to appeal criminal acquittals.

"A judicial review of the finding that there is no case to answer and that ... (Pyne, Lynch, and Barber) are not guilty of the charges would amount to allowing the prosecution to appeal an acquittal," the judge said.

"That is not permissible under our law."

She added: "... A complainant is not at liberty to seek to cause the prosecution for the same offence."

In saying that the trio was not properly named as respondents, the judge noted that "as accused persons, they could make no order in their own trial".

With respect to the decision of the DPP not to associate herself with the application, Lawrence-Beswick noted that while a private citizen was at liberty to provide information for the prosecution of another individual in a criminal matter, the DPP was constitutionally empowered to discontinue any criminal proceedings. It would have been prudent, therefore, for Gorstew to have solicited the involvement of the DPP.

The judge observed: "The DPP was served with the documents in this matter as a consequence of an order of the court. At the start of these proceedings, counsel attended for the DPP but has not played any part in the proceedings. The DPP has not joined as a party.

"To proceed to judicial review without the approval/consent of the DPP raises the very real probability of a waste of judicial time where the DPP is empowered to discontinue proceedings."