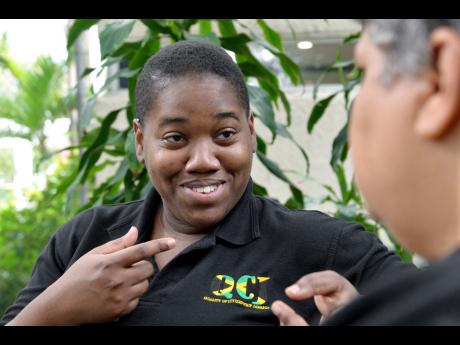 When Angeline Jackson and a friend were ambushed at gunpoint and sexually assaulted on a wooded trail outside the Jamaican capital, police initially seemed less concerned about the attack than the fact that she is a lesbian.

"The first policewoman I spoke to told me I should leave this lifestyle and go back to church," Jackson recalled of the 2009 attack, shaking her head in frustration.

It is an attitude all too common on the island, where gay rights activists say homosexuals suffer pervasive discrimination and occasional attacks. Activists say some lesbians, gays, bisexual, and transgender (LGBT) people have even been the victims of brutal sexual assaults intended to force them into becoming heterosexual or punish them for not fitting societal norms.

Jackson says she was targeted by a small group of anti-gay rapists who posed as lesbians on an Internet chatroom and lured the two women to the remote footpath. The response to her attack inspired Jackson to take action. Now, the 25-year-old woman directs Jamaica's only registered organisation for lesbians and bisexual women.

Jamaica has long had a reputation for intolerance of male homosexuality, with many on the island seeing it as a moral perversion imported from abroad. But the stigma against Jamaican homosexual women and the underreported crime of targeted sexual assault of lesbians is receiving growing attention.

Earlier this month, President Barack Obama singled out Jackson's advocacy during his 24-hour visit to Jamaica, telling a crowd that she courageously chose to speak out even though "as a woman and as a lesbian, justice and society were not always on her side".

With a population of less than three million, few incidents of sexual attacks are reported to LGBT activists. The island's main gay rights group, J-FLAG, has documented several cases over the years and Jackson's burgeoning organisation has heard of about a dozen.

Even when attacks are reported, prosecution is difficult in Jamaica's inefficient, overwhelmed criminal justice system. The main alleged assailant in Jackson's case, in fact, was acquitted in 2011, though he previously was accused of a number of rapes and sexual assaults.

Police Superintendent Enid Ross-Stewart, head of the island's sex crimes unit, said investigators have never received a report of someone targeted because of their homosexuality and she believes that "all the people who are raped come forth".

Reggae singer Diana King, who, in 2012, became the first Jamaican musical artist to publicly come out as gay, recently tweeted from her Florida home that when she was a 13-year-old on the island, she was "gang raped for looking at a girl too long".

In her 2010 memoir, Brooklyn-based writer Staceyann Chin writes she was ostracised after coming out as a lesbian on a Kingston college campus and one day was herded into a bathroom by several male students, who sexually assaulted her while telling her that women were created for men to enjoy.

The Associated Press doesn't normally reveal the names of sexual assault victims, but the women in this story have come out publicly to discuss their ordeals.

Jackson is gaining recognition here and abroad for her work with her group, Quality of Citizenship Jamaica. But so far, few LGBT women are willing to risk exposure.

In the northern city of Montego Bay, a lesbian told AP she wasn't ready to pursue justice for a 2011 attack she described as a "corrective rape" by a friend's brother.

He cornered her, she recalled, remembering his Jamaican Patois: "Yuh t'ink mi nuh kno who yuh be? Yuh gwaan like you're a man. Mi si how you dress an' mi kno who yuh be," she said.

The woman, who asked to remain anonymous for fear of retaliation by her attacker and banishment by relatives, conceded that perhaps she never will report the crime.

"I once thought if I had a gun, I'd kill the man who forced himself on me," said the woman in her late 20s, her voice weighted with sadness. "But I'm doing my best to just move on."