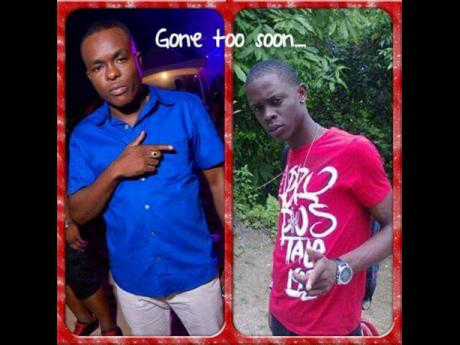 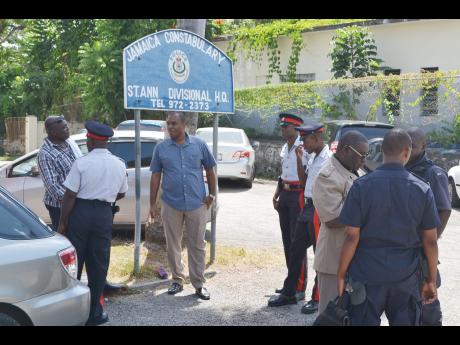 Members of the Jamaica Constabulary Force (JCF) in St Ann were yesterday left mourning the loss of two of their colleagues when a constable was apparently driven to suicide after killing his close friend.

While witness reports could not settle on whether the initial incident was intentional or accidental, what is known is that Constable Anduialy Smith, 30, shot and killed his squad mate, Constable Keemo Walsh, 20, during a birthday celebration for a driver at a favourite entertainment venue in White River, Ocho Rios, about 3:30 yesterday morning.

Smith, apparently overcome with grief after Walsh died on the way to the St Ann’s Bay Regional Hospital, reportedly then turned his licensed firearm on himself.

Sunday was Smith’s birthday and he would have had his own celebration later in the day.

Smith, who was attached to the special squad and stationed in St Ann's Bay and Walsh, of the Ocho Rios station, were inseparable.

"They were best friends. You never see one without the other," said Superintendent Steve Brown, who is the acting head of the parish. "They were very talented, two bright young men."

While early reports suggested a disagreement in relation to a woman at the party, Brown would offer little information on what transpired.

“There's nothing much I can tell you. I can only confirm that two police officers from my division are dead and they died under very tragic circumstances. The information we have is that one shot the other and shot himself afterwards,” Brown told journalists.

He said the police were carrying out in-depth investigations into the incident that has hit the constables’ colleagues hard.
Yesterday afternoon Police Commissioner Dr Carl Williams offered condolences to the deceased policemen's families.

“This unfortunate incident has left us all in mourning, and I want to assure the families that the division’s finest are working to ensure that the matter is thoroughly and speedily investigated,” said Williams.

It was a birthday celebration for a driver, a member of the Jamaica Union of Travelers Association (JUTA), who was linked to the Content Gardens Police Youth Club, of which Walsh was a member.

Smith and Walsh aside, there were several other JCF members at the venue when the incident occurred.

A patron told The Gleaner that the trail of events started by accident.

"They were playing with something they shouldn’t be playing with and one (Walsh) got shot,” the patron said in reference to a firearm.

The wounded policeman was put in a JCF pickup and taken to hospital.

“I heard that when he (Smith) realised that his friend had died, he shot himself,” the patron added.

Smith shot himself in the carriage of the pickup, sitting next to his friend, who had just taken his last breath.

A policeman later pointed out to journalists a bullet hole in the vehicle, said to have resulted from that fatal shot.

Brown said the incident has had a devastating effect on the policemen’s colleagues.

“The mood in the division is very sombre; the two police officers who died were very well known and very popular. It’s a really, really sad mood in St Ann, especially in Ocho Rios and St Ann’s Bay where they worked,” Brown said.

Members of the JCF and family members alike who turned up at the station in St Ann’s Bay received counselling from the Force chaplain and other pastors who turned out to assist.

“Some of the pastors abandoned church to come and assist us, which we are eternally grateful for. Police officers within the ranks of the organisation are also seeing how best they can assist our area Force chaplain,” Brown said.

“The situation is overwhelming but we’re coping. We have to see how best we can cope with this one.”

One female sergeant at the station described the two as "very good policemen, two brilliant minds".

Another officer simply said: "This couldn't be good for any of us."

Meanwhile, Trevor Grier, president of the Content Gardens Police Youth Club, where Walsh was a member, described him as an integral part of the club.

"He was an active leader in the club,. He was always there, from the first day they introduced him to us," Grier stated.

"He was a person we could call upon for anything at any hour, day or night. He would come on trips with us, when we’re doing our projects he would be there. He’s a person all clubbites will miss.”

Walsh joined the club late last year after he was transferred to the Ocho Rios station.

“I don’t know how I’m going to console my clubbites because from this morning everybody’s crying,” Grier said.

The driver whose birthday was being celebrated, had taken club members of the Content Gardens Police Youth Club, including Walsh, on a trip just the previous Saturday.