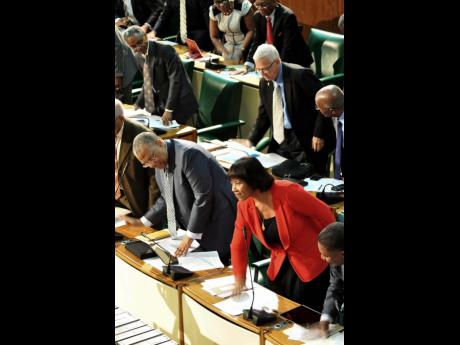 Jermaine Barnaby
Prime Minister Portia Simpson Miller and members of her team as they celebrate the passing of the Caribbean Court of Justice bill in Parliament yesterday. 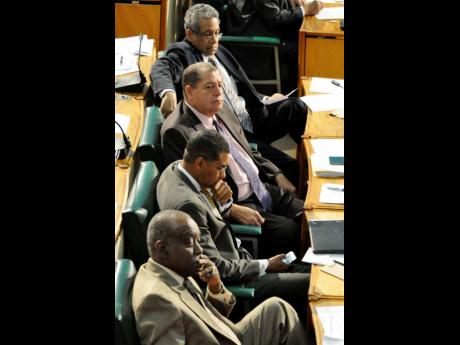 Jermaine Barnaby
Members of the Opposition from left, Derrick Smith, Andrew Holness, Audley Shaw and Kenneth Baugh in a contemplative mood, during the passing of the Carribbean Court of Justice bill in Parliament yesterday.
1
2

EVEN after seeing efforts to secure the parliamentary opposition's support of three bills that would pave the way for Jamaica to abolish appeals to the Judicial Committee of the Privy Council and make the Caribbean Court of Justice (CCJ) the country's final court of appeal, the Government said it would be seeking to convince opposition senators to abandon party ranks and vote for the bills.

Members of Parliament (MP) voted strictly along party lines yesterday to secure passage of the three bills - one of which required a two-thirds majority - in the House of Representatives.

"The Government believes that the CCJ is the appropriate institution for our final appellate court and we will reach out to see if we can get support in the Senate," House Leader Phillip Paulwell told The Gleaner.

With the Government having exactly two-thirds of the MPs in the 60-seat House, and the 21 Opposition MPs saying no to the CCJ bills, it required the original vote of Speaker Michael Peart to guarantee the success of the Constitution (Amendment) (Caribbean Court of Justice) bill.

Peart, however, was not required to vote on the other two bills - the Caribbean Court of Justice Act and the Judicature (Appellate Jurisdiction) (Amendment) Act - as they were not constitutional in nature. They were carried with 41-21 majorities.

But as Prime Minister Portia Simpson Miller led a bench-thumping chorus to hail the passage of the bills, Opposition MPs made it clear that the matter was far from over.

In order for the constitutional bill to succeed, the Government must sway at least one of its eight Opposition senators and ensure its 13 members vote for the bill.

"A number of discussions have been taking place for over a year, but the nature of these discussions has been confidential," Paulwell told The Gleaner yesterday when asked about a draft agreement sent to Opposition Leader Andrew Holness, seeking to get his support for the bill.

While declining to confirm whether a proposal obtained by The Gleaner represented one of the attempts by the Government to enlist the support of the Opposition, Paulwell said that "you would have seen from today that although a number of efforts have been made, nothing has materialised".

"We will continue to reach out," he added.

The Opposition has said that the issue of whether the CCJ should replace the Privy Council as Jamaica's final court of appeal should be put to the Jamaican electorate by way of a vote referendum, but the Government has said that it is unwise to subject matters of the judiciary to the political process.

The proposal from the Government, obtained by The Gleaner, was that more than 50 per cent of MPs and Senators vote in support of the CCJ bills.

In return, the Government said it would have a referendum on the matter "at or before the next general elections in Jamaica, whereby the voting electorate may vote yes or no to that question".

The Government also said that it would not bring the CCJ bills into operation by way of the publication in the Gazette of a notice unless more than 50 per cent of the voters say yes to the CCJ.