Jamaica hoping to be world leader in medical marijuana 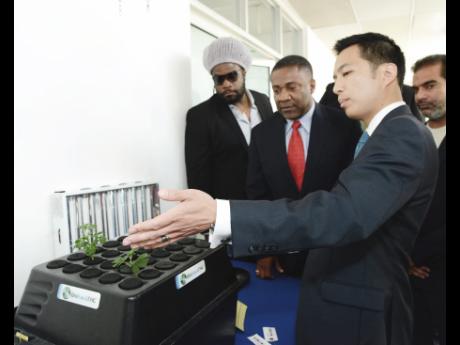 The Government intends to pull out all the stops to make Jamaica a world leader on the medical uses of marijuana.

Minister of Science, Technology, Energy and Mining Phillip Paulwell said marijuana is one of the most researched herbs, and evidence is pointing to a significant number of medical benefits from the plant.

"There is now convincing data and evidence to support beneficial effects in relation to glaucoma, epilepsy, eating disorders and several more conditions, especially those affecting the nervous system," Paulwell said yesterday at a ceremony to hand over a marijuana research licence to the University of Technology (UTech) at the institution's Papine campus.

This licence permits the university to grow the herb for the purposes of research and development, in keeping with the provisions of the Dangerous Drugs Act.

A similar licence has been granted to the University of the West Indies.

"If Jamaica wants to establish itself as a centre of excellence for research in ganja, this should be the home of research and development in ganja," the minister said.

"I am into building value here, and making this a multibillion-dollar industry for us in Jamaica."

Acting UTech President Burchell Whiteman pointed out that the university was engaged in research "to advance national goals through relevant innovations and solutions".

He said that execution of the licence would be done through local and international partnerships.

"With the current global interest and commercialisation of cannabis and hemp for medicinal, cosmeceutical, nutraceutical and functional foods, UTech intends to improve Jamaica's capacity to reap the social benefits that are expected to come from this nascent industry," Whiteman said.

The ceremony was part of UTech's Medical Marijuana Integration Day, held under the theme 'Cannabis Reclaimed'.

Later in the day, UTech hosted a public forum on the legal aspects of decriminalisation of marijuana and the implications for research.

The Dangerous Drugs (Amendment) Act 2015, also referred to as the Ganja Reform Law, became effective on April 15. It provides for the creation of the Cannabis Licensing Authority, which will be responsible for developing the regulations governing the medical marijuana industry.