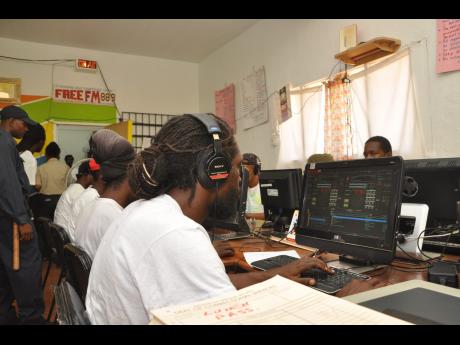 Jermaine Barnaby
Inmates in the computer room just outside the studio of FREE FM at the St Catherine Adult Correctional Centre on Thursday.

THEIR FREEDOM might be restricted, but this does not prevent inmates at the St Catherine Adult Correctional Centre from extending their voices way beyond the perimeter wall of the institution.

Freedom of expression is said to be alive and well at the correctional centre as inmates are allowed to air their views on FREE FM on just about any issue that provokes their thoughts.

FREE FM broadcasts on 88.9 on the FM band and can be picked up in Spanish Town and its environs.

Senior Superintendent at the correctional centre Reuben Kelly said the inmates received training from the local media as well as non-governmental organisations overseas.

"They run a full programme, with news, sports, religious

The head of the correctional facility said inmates were not muzzled but were allowed to express discontent with internal issues at the institution.

He said that if a person had a concern at the institution, he could air his views on FREE FM without being victimised.

During a tour of the facility on Thursday, one disc jockey, DJ Gino, apologised to his listeners for a brief break in transmission as he interacted with the touring party in studio.