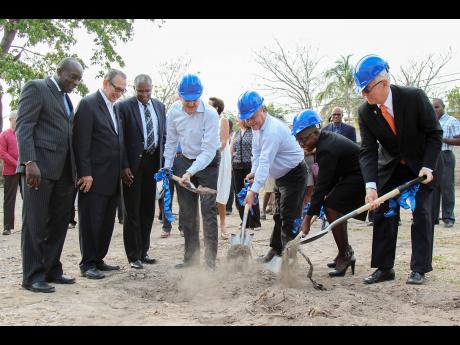 Going back to its roots, Jamaica College will once again have a dormitory, as ground was broken last Thursday, for the construction of a three-storey building.

And who better to name the dormitory for than one of its outstanding old boys, the late Mayer Matalon.

JC stalwart R. Danny Williams said the dorm has been in the making for the past nine and a half years, the last project in a 10-year plan that was put together to improve the famous institution.

When completed, the building will house between 60 and 70 students. Apart from the Matalon family, members of whom were present, JC old boy Gary 'Butch' Hendrickson and other contributors, ScotiaFoundation and Scotiabank have also played their part, donating J$15 million to the construction of the dormitory.

"This donation is in honour of the Honourable Mayer Matalon, who served on the Scotiabank board for over 45 years," said Joylene Griffiths Irving, director of corporate social responsibility and executive director of ScotiaFoundation.

"Based on his immense contribution to Scotiabank and Jamaica, we thought it appropriate to honour his memory through the support of education and youth development at his alma mater, Jamaica College."

Boarding facilities were removed years ago because of a lack of funding. Williams said a dorm was essential for three main reasons. He noted there were old boys around the world who wanted to send their sons to JC. Plus, there were boys who would be greatly helped by staying on the premises because their current living situations might distract them from their study. But he also mentioned that some athletes want to train early in the morning or late in the evening.

"It also means that they don't have to travel to certain neighbourhoods at certain hours," he reasoned.

Gladstone 'Tony' Lewars, who represented the JC Trust at the ceremony, recalled his four years of boarding at the school. He said the experience was the greatest influence in his life, as "it taught us discipline, it taught us independence", despite getting up at 5 a.m. and having to take showers in very cold water.

"I want to assure the benefactors that this asset will be taken care of very well," he said.