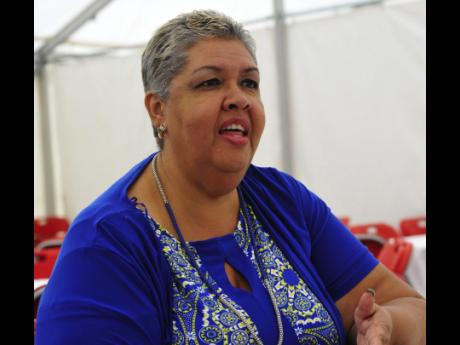 Jamaica's High Commissioner to the United Kingdom (UK) Aloun Assamba's tenure as a diplomat has been extended by another two years, and she is promising that focus will be on Jamaicans living illegally in that country.

Assamba told The Gleaner yesterday that increased attention would be on getting Jamaicans to legitimise their citizenship status.

"I have to step up the campaign to get persons who have been living here for many years and who qualify to get their status regularised and to get persons to apply for Jamaican citizenship if they qualify," said Assamba.

She told The Gleaner on Tuesday that her positions of high commissioner to the UK and ambassador to a number of other European countries have been extended by another two years.

"I am happy to report that my appointment has been renewed for another two years," she said.

Assamba's three-year tenure as high commissioner of Jamaica to the UK and ambassador to Finland, the Republic of Cyprus, as well as the Kingdoms of Denmark, Norway, and Sweden ended on the weekend.

She disclosed that she received the new letter of appointment, signed by Governor General Sir Patrick Allen, on Monday.

"In the next two years, I would like to streamline the consular services to provide an easier experience for our nationals and guests," she said.

Assamba said that there was a particular challenge with this issue.

"We have outgrown the space in our office, and with budget cuts, we are not able to have as many surgeries out in the communities as we would like to," she said.

"We also have to continue our lobbying efforts to have our Jamaican candidates elected to the international organisations that they have been nominated for," added Assamba.

Assamba told The Gleaner that the last three years passed like a whirlwind.

"I tried to get hold of all the activities in the Jamaican community, make connections in the other countries that I have responsibilities for, take on leadership in the Commonwealth Secretariat and other Commonwealth organisations as required, as well as the other international organisations based here in the UK," she said.

Assamba chucked aside suggestions that the extension of her tenure had anything to do with the recently concluded elections in the UK.

"I do not believe there is a connection, and there doesn't need to be," she said. "I believe the decision to extend was made long before that event."

A lawyer, politician, and diplomat, Assamba is a former member of parliament for South East St Ann and served as minister of tourism, entertainment, and culture.

"All of the jobs I have had have prepared me for this role," she asserted. "I have been able to use all the skills I have acquired along the way in this job."

A recipient of the Heinz Fellowship, University of Pittsburgh Veuve Clicquot, La Grande Dame Award and American Biographical Institute Woman of the Year in 1999, Assamba will be honoured by the World Council of Credit Unions for her work in Jamaica and the Caribbean at its conference in Denver in July.