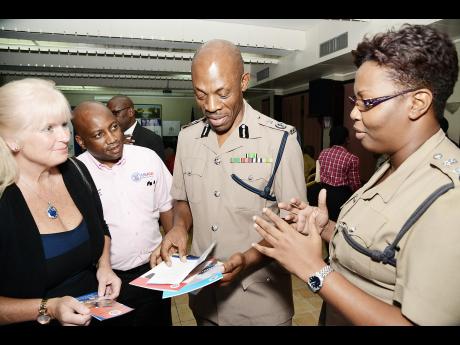 An 18 per cent jump in murders four months into the year has wiped out the gains made last year, but the country's police chief is insisting that it's not time to panic.

"If it is happening over a much longer term, then we really have a problem. But it's only five months ... we are not yet halfway through the year," Police Commissioner Dr Carl Williams told The Gleaner yesterday.

Up to Tuesday, however, police statistics show that 428 persons have been reported killed since the start of the year, an 18 per cent increase when compared with the 363 murders recorded for the corresponding period last year.

This comes at a time when shootings are down 17 per cent; rapes are down 30 per cent, break-ins are down 24 per cent; and robberies are down one per cent.

But amid growing concerns about the increased bloodletting, Williams has asserted that the spike in murders is "not a national problem".

According to him, the problem has been confined largely to four police divisions: St Catherine North, St James [specifically Montego Bay], Westmoreland, and Clarendon.

"If we didn't have the slippage in those divisions, we would have had a very good year up to now," Williams argued.

While noting that criminal gangs were responsible for 50 per cent of the murders recorded this year - down from 67 per cent last year - the commissioner said the spike in murders is also being fuelled by an increase in domestic and other types of killings.

"We've had many people killing their close relatives, or friends, or their spouses. We have had many more this year than last year, so the proportion of domestic murders is much, much greater," he pointed out.

Despite this, Williams sought to give the assurance that the police have put measures in place to turn things around quickly. Among those measures, he said, were increased deployment of police personnel in crime hot spots; renewed focus on persons wanted for serious crimes; and more robust vehicular checkpoints across the island.

"We believe that we have to fully control the roads because the criminals move by road, and I believe all of this [measures] is going to have the effect of reducing murders and giving us back the gains we made in the last quarter of last year," he explained.

Williams acknowledged that Jamaicans should be concerned about an increase in murder, "even if it is one per cent".

"But I believe we are able to get it back, and we are going to do everything that we can," the commissioner said.

Williams was speaking after he accepted a variety of materials from the United States Agency for International Development - through its Community Empowerment and Transformation Project Phase Two - aimed at increasing awareness about corruption and widening the Jamaica Constabulary Force's community-based policing programme.