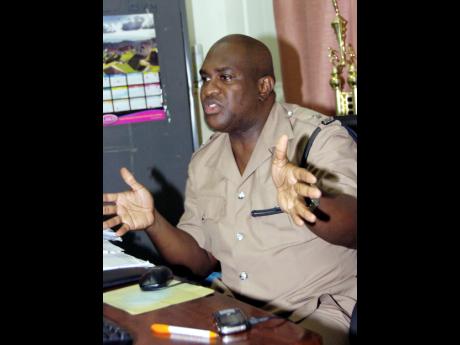 Just over a decade ago, Blackwood, who resides in one of Montego Bay's volatile inner-city communities, looked on helplessly as her youngest brother murdered her older brother in a fight over bathing soap.

"Him (the killer) use my big brother bath soap, and when my brother talk to him about it, he started to use bad words to

him and started to hype and behave like him bad," recalled Blackwood. "My brother (the deceased) got vex and grabbed him and they began to wrestle. During the tussle, the little one (the killer) pulled out a knife and stabbed him in the neck, killing him on the spot."

It is senseless killings, like the one witnessed by Blackwood, that have prompted McGregor's call for efforts to tackle the pervading culture of settling disputes by violent means, which has factored quite high in the more than 60 murders committed in St James this year.

"In St James, the majority of the murders that are occurring are lifestyle related. A man has an issue with his brother and cuts him on the wrist, and the brother takes the knife and cuts his throat and kills him," McGregor said in an exclusive interview with The Gleaner earlier this week.

He added: "We have had 12 murders in St James in the last two weeks, but only two can be attributed to gang-related violence," McGregor said. "We have been dismantling the gangs, but the murders are still continuing, so we need to look at that mental side that is causing people to kill people for nothing."

While outlining some of the strategies that the St James police would be implementing to tackle the crime situation, McGregor said strategies must be found to address negative methods of conflict resolution.

"These (lifestyle killings) are some one-off situations ... most of our murders in St James are by first-time offenders. So it tells you that there is something within the structure of the family, the lifestyle, which is fuelling the kind of actions that we are getting," stated McGregor. "We

definitely have to find some way to impact and influence this

attitude that is fuelling the behaviour pervading our country ... causing people to be settling disputes by killing each other."

While a decade has transpired since the gruesome brother-brother killing at Blackwood's yard, her

family is still tainted by the incident as the shameful memory is yet to dissipate.

"I know that people are looking down on us ... they still

chat us all the time," said Blackwood. "If any member of my family should get in a quarrel with anyone, the first thing they usually say is that a curse is on my family because of the killing of my brother."

During the rampant bloodletting that gripped St James at the start of the year, McGregor, who was making big strides in curtailing lawlessness in west Kingston, was transferred to St James to perform a similar task.

While he had early success, getting some 15 wanted men off the streets and recovering numerous illegal weapons, things are again looking ominous.

To date, 65 persons have been murdered in St James since the start of 2015, which is a reversal of the decline in homicides that was experienced towards the end of last year.

* The name of the family

in this story was changed as

well as their community.