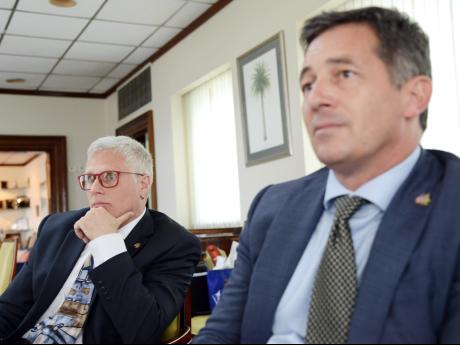 THE TWO senior gay-rights advocates officially dispatched to Jamaica by the United States (US) last week, have emphatically rebuffed assertions that they were in the island to influence changes to the controversial buggery law.

Randy Berry, special envoy for the human rights of LGBT persons, and Todd Larson, senior LGBT coordinator at the United States Agency for International Development (USAID), steered clear of the issue of the buggery law during an interview with The Gleaner, after a series of meetings in Jamaica.

"Our interests are focused on looking at some fundamental human-rights issues involving members of the LGBT community as it relates to the broader principles of equality," said Berry.

"So I have no comment on internal political issues or the repeal or any changes to the law," he added.

Larson was just as cautious.

"We recognise that it's a complex piece of legislation with various elements and we trust in the dialogue and discussions relevant to the legislation going one way or another," he said.

an attack on morals

The visit has been viewed in some quarters as evidence of the pressure being mounted on Jamaica by the US on the buggery law, with at least one group describing the visit as an attack on Jamaica's morals and sovereignty.

The buggery law has been an explosive issue on the public agenda particularly since December 2011.

At that time, then Opposition Leader Portia Simpson Miller promised that her administration, if she took power after the general elections, would initiate a conscience vote on whether the buggery law should be repealed.

The two men who arrived in Jamaica on Thursday, met with a range of government and non-governmental organisations before leaving on Saturday.

They told The Gleaner that they came away satisfied after discussions with government officials as well as leaders in business, academia, civil society, and the Church.

They also commended the consultative exercise that, they say, has been initiated with the local LGBT community as a marginalised grouping.

The LGBT advocates stressed that they welcomed the consultative path being pursued and urged Jamaica to 'continue the dialogue'.

"We met with a wide range of civil society, policymakers, religious and business leaders," said Berry.

"I would advise Jamaica to continue to talk; this is the way to proceed," he added.

"We had some really interesting meetings over the past two days and I came away from them quite optimistic about an emerging conversation and increasing dialogue," he said.

Larson told The Gleaner that he was impressed by what he said was the calibre, focus, pride and patriotism of Jamaicans who are leading the discussions.

"We have been able to listen and learn from the discussion to take the perspectives and bring them back to the US," said Larson.

"We are satisfied that on those issues of the LGBT folks, Jamaica is engaged in very productive dialogue," he added.