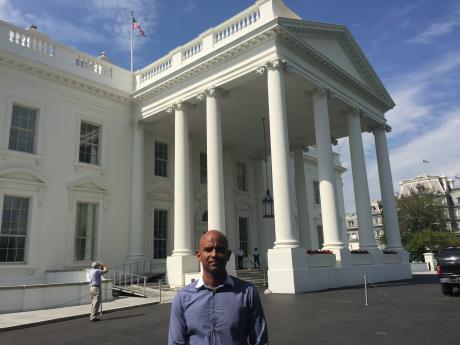 Contributed
Hamilton outside the White House. 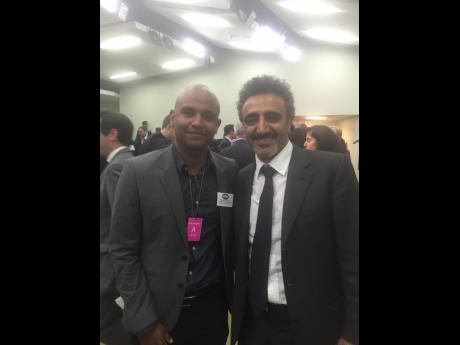 Contributed
Kirk-Anthony Hamilton (left) with one of his mentors billionaire Hamdi Ulukaya, founder of Chobani Yogurt.
1
2

Just over a month since his visit to the island, United States President Barack Obama is making good on his commitment to support the entrepreneurial drive of young Jamaicans.

To this end, Jamaican entrepreneur, Kirk-Anthony Hamilton recently shared space with 75 young entrepreneurs who were invited to a global entrepreneurship meeting at the White House, hosted by Obama.

Speaking with The Gleaner after his visit to the White House, Hamilton said he was honoured to have been selected as the only Caribbean native to attend the meeting.

"It's still a very surreal experience. It's one of those things that you are not really sure of until you pass through the final security checkpoint," he said. "It was really one of the best days of my life for sure. I was the only person from the Caribbean there so I was very happy to represent Jamaica and the region."

Hamilton told The Gleaner he plans to leverage the partnerships formed at the White House event to mobilise resources for entrepreneurial ventures that he wants to pursue. One such venture is a move to bring an international retail franchise to Jamaica and the wider Caribbean.

While he was unable to disclose details, he said the agreement was a multimillion-dollar deal that would benefit the retail sector.

"My partners and I have amassed a franchise deal which will be entering the Caribbean this year. It's a company that has about 500 stores around the world and we believe that they will do well throughout the region, so we are in the process of setting up the various relationships to make it work" he said.

"What we have is a stream of three retail brands that will be entering the region one after the other."

Another venture the global shaper has in mind is the establishment of his own luxury resort to complement his destination experience platform. The destination experience hosts luxury VIP charity events which attract high-net-worth individuals from around the world. The events are aimed at marketing Jamaica as a luxury destination and is Hamilton's way of diversifying Jamaica's tourism product.

Hamilton's company, The Infiniti Partnership, has interests in the real estate, entertainment, hospitality and retail sectors, and will be doing fundraising to pursue new projects later this year.

Hamilton indicated that one of the highlights of his time at the White House was meeting entrepreneurs from the cable network series, Shark Tank.

"The sharks from Shark Tank were there so I me Daymond John, Barbara Corcoran and Mark Cuban, and in addition, someone whom I consider a mentor, Hamdi Ulukaya, the billionaire founder of Chobani, was there."

Hamilton, who is the curator for the Kingston hub of the World Economic Forum's Global Shapers, wants young entrepreneurs to pursue their dreams relentlessly.

"My advice for young entrepreneurs is that you really need to just do it, stop making excuses. I speak to too many young people who feel that the system is against them but a lot of the big players in the Caribbean went through a lot of the things that we are going through and they had to fight to push their ideas out there so you have to fight for what you want," he said.