Save my life! An impassioned plea from man whose medical file went missing 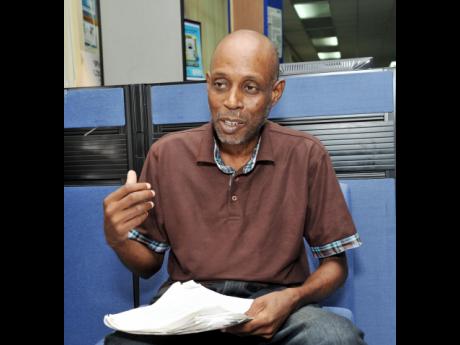 Norman Grindley
Kenneth Myrie : They just keep telling me to come back and every time I go back, they just can't find the file. 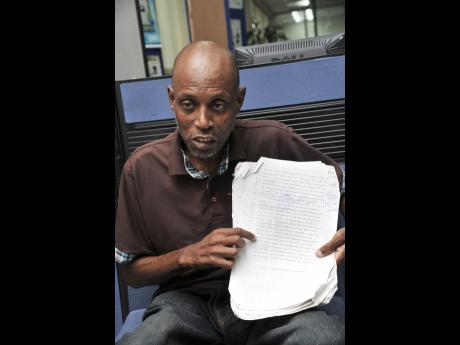 His strength has virtually left him and the clock appears to be ticking on the deteriorating health of 49-year-old Kenneth Myrie as he makes an impassioned plea to the health authorities at Kingston Public Hospital (KPH) to save his life.

Myrie says he was scheduled to do two surgeries from 2012, but these have not taken place, to date, because his medical file at the KPH has been missing for more than three years.

He told The Gleaner that the surgeries relate to two conditions - haemorrhoids and hydrocoele.

"They just keep telling me to come back and every time I go back, they just can't find the file. Sometimes I spend all day out there lying on the bench. My family had to get a taxi to take me back home in the evenings.

"Now I have weakness, I have short o' breath, I can't walk too far, I can't sit up too long, I have to be lying down," said Myrie, who claimed he lost about 80 pounds.

He said almost every other month, since 2012, he has had to be rushed to the hospital to get a blood transfusion. "And what they do is to take me to the emergency room, write me up, send me upstairs, give me some blood and then send me back home again, and when it happens again, they do the same thing again. It's like putting gas in the tank and when the gas runs out, I come back for more," he said as he struggled to sit upright during a Gleaner interview.

"I take about six different kinds of pills in the morning, six in the afternoon, six in the evening, and I have to be taking painkillers - morphine," he revealed.

He said sometimes he tries to bear the pain because he does not want to get addicted to the morphine. "That's a very strong drug - it's the only one that takes away the pain because the pain is so strong. Sometimes I have to be on my knees and on my head, kneeling down like I am praying when the pain get too strong."

While incarcerated at the St Catherine Adult Correctional Centre in 2005, Myrie said he developed an infection in his stomach.

He blamed the conditions at the correctional facility, at the time, for the infection he developed, which first landed him in Spanish Town Hospital and later KPH.

"The food wasn't appropriate and the meats that they used to serve us were rotten. There was no running water, so I had to catch the water and put it down in the bottle, so sometimes you see the little things moving around in it like little worms and I caught an infection in my stomach."

Myrie recalled the severe pains that pounded his stomach, which forced the correctional officers to take him to Spanish Town Hospital for a medical examination.

Doctors there reportedly told Myrie that his small intestine was twisted and steps were made to perform surgery on him. However, the hospital reportedly made the decision to transfer him to KPH.

Following his surgery, Myrie returned to prison but said he missed out on a number of appointments because the authorities at the correctional centre reportedly claimed they did not have any vehicle to take him to the hospital.

In 2011, Myrie received pardon from the governor general on medical grounds and was released from the St Catherine Adult Correctional Centre after serving 15 years for murder, a crime for which he claims he is innocent.

When Myrie returned to KPH in 2012, he was told that his medical file could not be found.

He complained to the public defender in 2012 about the problem, "and from that time they just keep on telling me to wait - they are looking into it. They send me letters that they wrote to the public hospital about the matter and I am not getting anywhere."

He said the Office of the Public Defender told him that the hospital had promised to respond to his concerns.

Myrie said he was told by a private medical practitioner that if he did not get the surgeries done, it could pose a serious risk to his health "because I could keep on losing blood and just collapse one day.

"I am just asking them to please offer me some assistance to help save my life."