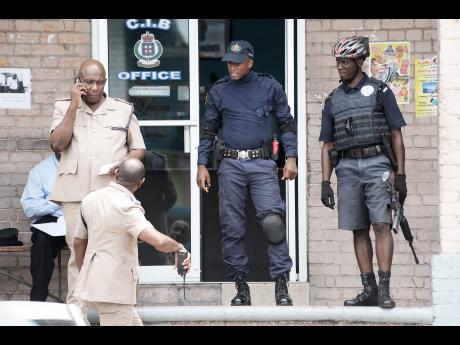 Stating that the country's economic recovery and security could be put of grave risk if the Government miss established wage targets, Jamaica's national security minister yesterday appealed to the Police Federation to return to the bargaining table and break its industrial action.
"We acknowledge that the Government wants to offer better pay to the police and indeed to all civil servants. However, the point must be made that any offer must be governed by the inherent ability of the Government to pay; and the constraints pertaining to the targets of the overall Economic Reform Programme. In the long run, adherence to these targets will result in improved economic performance and a more robust economy for all," Bunting said.
Jamaica, under its Extended Fund Facility programme with the IMF has agreed to lower the public sector wage bill as percentage of GDP to nine per cent by next year. The public sector wage bill is $165 billion, and Bunting has said that the police wage bill alone stands at $24 billion, and that the claim being made by the Federation in the current negotiations is in excess of $30 billion.
In a statement to the House of Representatives, Bunting said that the rank and file members of the force have been effectively offered a 12 per cent increase in salaries over two years and stressed that the Government is not in a position to make a better offer.
"The Ministry of Finance and Planning has put on the table an effective offer of 6.5 per cent in Year 1 and 5.5 per cent in Year 2. This comprises a 3.5 per cent per annum increment which every Jamaica Constabulary Force member receives plus the additional three per cent offer in Year 1 and two per cent offer in Year 2," Bunting said.
The rest of the public sector gets a 2.5 per cent increment.
The police, who took industrial action Monday night, have asked for wage increase of 100 per cent.
"We consider it unfortunate that the Police Federation chose to pursue this course of action, which is not appropriate for an essential service. It exposes the public to
unnecessary risk, and may cause significant harm to the professional image of the JCF, which has been improving in recent years," the minister said.
He told the House that the protest action has affected most Resident Magistrates Courts across the island, in addition to the Supreme Court in Kingston as well the Family Court and Traffic Court.  He said that the army has been called out and more members will be deployed if the need arises.
"I wish to assure the nation that certain contingency measures have been put in place to mitigate against the impact of the protest action, including the increased use of JDF
personnel in support of the Police. We will strengthen these contingencies even as we appeal to the Police Federation to end its protest action and return to the negotiations," Bunting said.
Horace Dalley, Minister without Portfolio, Ministry of Finance and Planning, who is leading the negotiations for the government, has written to the Federation inviting them attend a meeting scheduled at the Ministry on Friday.

Meanwhile, Derrick Smith, the opposition spokesman on national Security, said that he agrees with the police that the five per cent being offered is too low but said he is not in a position to say what would be a fair offer at this time.
Smith said that the police "were provoked into taking these actions", arguing that Dalley's posture to the workers has not been accommodating and that the police have had to endure a five-year wage freeze while seeing inflation erode their purchasing power.
"I concur with the minister in terms of asking all parties involved to go back to the bargaining table but I also say make a better offer when you go back to the bargaining table," Smith said.
"When the Federation in the previous period was negotiating with the past government, I am told that they received as a total package of 42 per cent and I know they would have been looking for something to compare or perhaps even better better," Smith added.