Jamaica gets passing grade on its treatment of British nationals in old, overcrowded prison cells 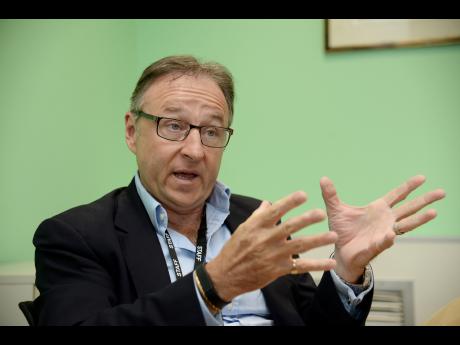 In the face of a gamut of challenges in Jamaica's over-burdened penal system, a senior visiting British official has given Jamaica a passing grade on its treatment of British nationals incarcerated here.

John Smith, North America and Caribbean consular regional director, has come to Jamaica to see how British nationals are faring in the overcrowded penal system.

"We are here to help Brits who get into trouble," said Smith. "The conditions there are old cells and very overcrowded facilities."

While the overpopulated environment is a source of concern to Smith, he expressed satisfaction that local authorities are doing their best under difficult circumstances.

"In terms of the conditions, it is difficult. It's not how we would have people in the UK (United Kingdom) in terms of access, but prison officials are working with the conditions that they have got," he said.

Smith said that only a small percentage of the more than 170,000 British nationals who visit Jamaica yearly run afoul of local laws, the majority of which are related to narcotics infringement.

BRITS NOR WORSE OFF

"I don't think the British nationals in prison are any worse off than anyone else in the facility," said Smith.

"I think one of our key challenges is to make sure that they don't face additional problems by virtue of being British nationals and that they are treated like everyone else," he added.

In assessing the state of British inmates in Jamaica, Smith disclosed that he visited the Tower Street Adult Correctional Centre on Tuesday of this week.

"What we see is prison authorities doing the best that they can with what is a very old and overcrowded facility," he said.

Added Smith: "I think that they are very open about it (the challenges) and I think they are doing a good job."

Smith revealed that he was struck that there was a lack of tension at the prison.

"It was a quick snapshot, but it proves that they are doing something right," he said.

Smith said his was part of periodic visits to get a sense of things on the ground in Jamaica.

"What the action feels like sitting in Washington, covering everything from Vancouver, Georgetown, feels kind of remote from the complexities and challenges on the ground," he said.

Said Smith: "We do a lot of work in the police and customs enforcement to try and address this problem (drug trafficking)," said Smith.

He added: "The message is if you are in this, you will get caught."

Smith told The Gleaner that he is mandated to respond to Brits who are in prison in Jamaica.

"While we raise concerns about some of the conditions, we also recognise that the country is operating in a tight fiscal environment, which is a [reality] that is being shared globally."

He added: "We also try to get the message across in the UK, which is 'Don't do this; you will get caught'.

"In doing so, we partner with Jamaica to get rid of this invidious issue."

He noted that given the large Jamaican population in the UK, it's not only Jamaicans living in the UK who dabble in illegal narcotic activities in that country.

"There are many Jamaicans whom we are proud of in the UK, but sadly, there are some who are incarcerated for a variety of reasons and I think drugs is a major problem in both directions."

Based in Washington, Smith covers North America and the Caribbean. He said he has teams across the region who provide support to British nationals living and visiting in the region.