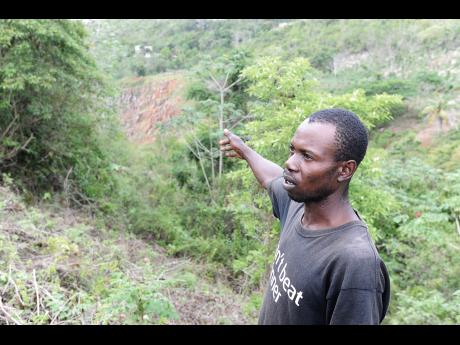 Ricardo Makyn
Robert Brooks points to a section of the mined-out land in Mocho, Clarendon, where the animals disappear. 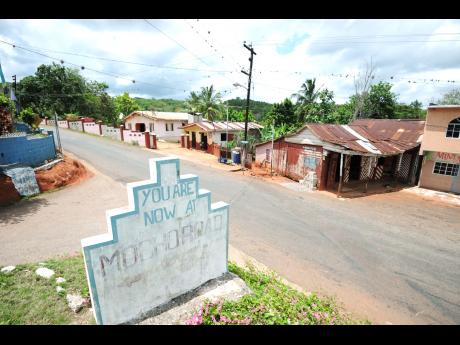 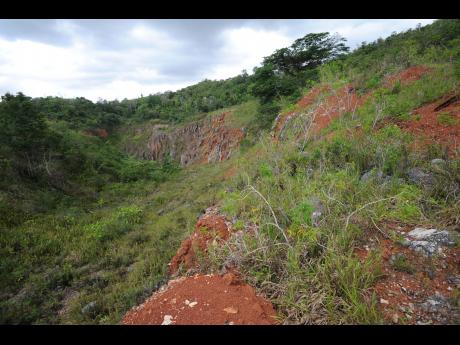 Ricardo Makyn
This pit, about 30 feet deep, is almost covered with vegetation.
1
2
3

myReport assignment: What's broken in your area that the authorities should know? Send us your stories, photos and videos at www.jamaica-gleaner.com/myReport. It's easy, just sign up and send. myReport... See it, snap it, share it!

Some 33 open bauxite pits lay sprawled in the hills of Clarendon, presenting great danger to residents and livestock who venture near to them.

Information supplied to The Gleaner by the Mines and Geo-logy Division indicate that of the 189 ore bodies that were disturbed for mining in the Mocho area of the parish, five ore bodies still have bauxite remaining in them. Permission, therefore, has not been granted for them to be rehabilitated as this would lead to sterilisation of the remaining bauxite. In addition, 28 ore bodies have not been rehabilitated and certified.

Under the law, a bauxite company has three years after the completion of mining activities to reclaim lands. Failure to do so attracts a monetary penalty of US$25,000 per year per hectare of land that is not reclaimed.

Phillip Paulwell, the mining minister, said yesterday that the Government is insisting on full rehabilitation where lands have been mined out. He also said that the Jamaica Bauxite Institute (JBI), which is the regulator, will be instructed to take steps to ensure that these open holes do not present a danger to life and property.

"I am anxious that where you still have mining operations and open pits that the areas be safeguarded and protected from stray animals and human beings. They need to put up safety barriers, and as soon as they are mined out, they need to move quickly to effect the rehabilitation, both to establish wells and water-

collection points and also to have the lands reclaimed and rehabilitated for agricultural use," Paulwell told The Gleaner.

Last week, some residents in Mocho pointed The Gleaner to a hole at Johnson Bottom, which they say has been a death trap to several animals. Robert Brooks was a picture of dejection as he told The Gleaner how he lost his Nubian nanny-goat, which he purchased for $7,000 with the hope of capitalising on his investment. He said the goat, like

several other animals in the area, slipped and fell into the pit, which is about 30-foot deep.

"Me did plan that me would have this goat and turn him into a flock because one goat can turn into 50 goats," Brooks said.

"This is a big setback for me, and I would love to get some compensation from the bauxite company. It is not me alone, but several people in the community lose animals that fall into the hole," he added.

Pearnel Charles, the member of parliament for North Central Clarendon, said that he has had complaints from people saying that their cows and goats have fallen and rolled to the bottom.

Charles added that if a human should fall into any of the pits, "the best option is to just cover you up and bury you".

According to the Mines and Geology Division, the ore body, KK-18, was mined out in 1997. It said that reclamation work on KK-18 is expected to begin in the last quarter of this year.

"At that time, the mining

Paulwell told The Gleaner that now that it has come to his attention that the open pits are posing a grave danger to animals and livestock, he would ensure that the JBI acts to remedy the situation.

"I am insisting that the JBI ensures that the companies put in place the safeguard mechanisms. These areas ought to be secured from humans and also animals," the minister said.

Plummer said that 156 ore bodies have been certified as satisfactorily rehabilitated, which represents 88 per cent of the area of lands disturbed for mining.

But one resident said that some pits had been filled and lands that had been reclaimed had not been properly done.

"It is pure madness dem do. Dem just destroy di place and leave it," he said.