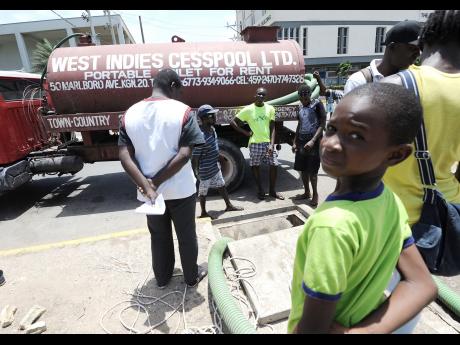 Ricardo Makyn
Onlookers gather as workmen from the West Indies Cesspool Limited, pump out water and oil from a drain adjacent to the Kingston Waterfront at the end of Princess Street yesterday. Earlier in the day there was an oill spill in the drainage system which quickly was put under control with assistance from the Jamaica Defence Force Coastguard and staff from the National Environment and Planning Agency.

While Digicel has indicated that it alerted the National Environment and Planning Agency (NEPA) to what it described as an oil leak in the storm drain at Kingston Harbour, the telecommunications company has been slapped with a warning notice by the monitoring agency.

Referring to an 'oil spill' in a late-evening dispatch to the media, NEPA stated that Digicel was served the notice for discharging polluting matter into a water body without a licence.

The agency disclosed that preliminary investigations found a diesel oil spill from a fuel line at the Digicel headquarters in downtown Kingston that supplies the company's generator.

NEPA said the oil traversed the storm drain that empties into Kingston Harbour and is fully contained, but has left an oil sheen in the vicinity of the Victoria Pier, which should dissipate naturally.

The agency also indicated that it continues to monitor the situation to determine any effect on marine life and to ensure that the clean-up operations are completed.

Digicel, for its part, stated that it was aware that a small amount of diesel oil was leaked into the storm drain near the Kingston Harbour.

The telecommunications company said the Office of Disaster Preparedness and Emergency Management (ODPEM), as well as NEPA were proactively alerted and, in turn, notified the Jamaica Defence Force Coast Guard and other relevant agencies.

Digicel sought to assure the country that it takes very seriously its commitment to the environment, as such, it is taking necessary steps to prevent further recurrence.