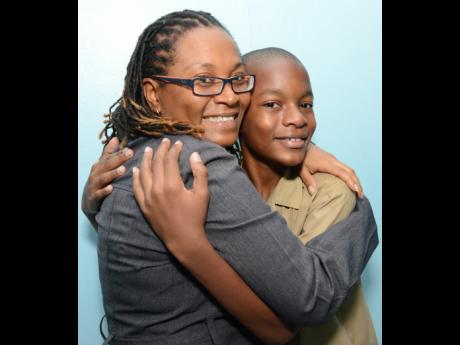 At first glance, there was no indication that 11-year-old Tariq Mikhail Shakir Wright had just received word that he had aced the Grade Six Achievement Test (GSAT) with perfect scores.

The soft-spoken student of Holy Childhood Preparatory School sat with his mother, Roxanne Patrice Wright, in the offices of the Jamaica Information Service (JIS) as if it were just another day.

The budding scholar was told minutes earlier that he had hit the perfect 100 per cent scoreline in mathematics, language arts, social studies, science and communication task.

The JIS administrative office was brimming with subdued excitement as colleagues celebrated with the proud mother, but Tariq seemed not to notice.

When he was teasingly asked in which subjects he had dropped points, Tariq responded with a face as straight as his 'A' grades: "I didn't get 99 in anything."

Asked whether he had expected to earn perfect scores, he shyly responded: "No."

He, however, disclosed that mathematics and social studies were his favourites.

But despite his modest responses, Tariq declared that he yelled in glee when he was informed by his teacher, Kavel Williams.

"She told me that I did well and hugged me," said Tariq in almost a whisper.

His proud mother confirmed that Tariq was always humble and on the shy side.

The brilliant boy, who aspires to be an industrial engineer, is headed to Wolmer's Boys' School when the new academic year gets under way in September.

Tariq's mother told The Gleaner that, like his son, her husband, Eldon Wright, a project officer, was ecstatic underneath a calm facade.

Roxanne, too, tried hard to conceal her overwhelming delight.

"I am proud with a capital P," she said, beaming.

She described her son as a hardworking and disciplined student.

"When I heard, I was not shocked, as I was always confident that he could do it," she said. "He is a well-mannered child who takes his school work seriously."

She shared that she was looking forward to a scholarship, preferably, a full one - to usher the child through high school.

Although Tariq toiled with unwavering focus over the books, The Gleaner was told that he plays hard as well.

He proclaims that he is an avid sports enthusiast and plays football, dabbled in track-and-field, tennis and swimming.

Said Roxanne: "He maintains a balance, as I ensured from early that he does, and so he plays hard whenever he has nothing on his hands but knows how to break whenever he has school work."

In instilling that quality of discipline in him, Roxanne said: "I never accepted a homework not going in."