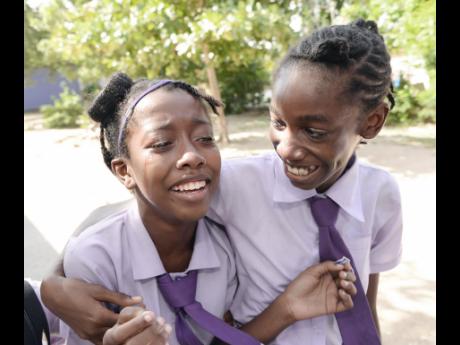 Jermaine Barnaby
Tears of joy flow down the cheeks of Rhyanna Bellnavis (left), who passed for Wolmer' Girls and Karo-Lee Briscoe, who passsed for St Andrew High, following the announcement of the GSAT results at Ascot Primary School in Portmore, St Catherine. 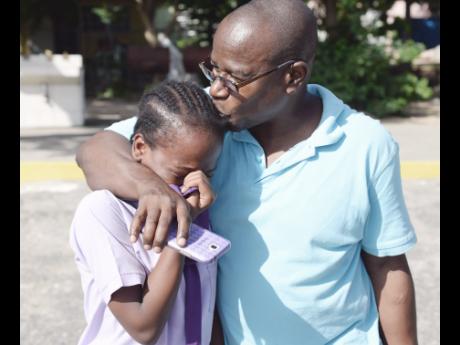 Jermaine Barnaby
Karl Francis (right) consoles his daughter, Shennel Francis, after she burst into tears on learning she was awarded a place at Cedar Grove High School in Portmore, St Catherine. Francis' scores ranged from 91 to 98. 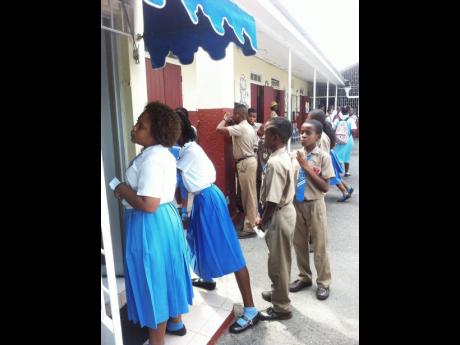 Ruddy Mathison
Students waiting eagerly outside the principal's office at St Catherine Preparatory School to find out their individual results in the Grade Six Achievement Test. 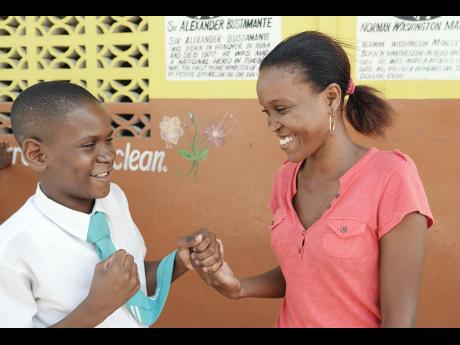 Jermaine Barnaby
Nikeisha Bailey was ecstatic over her son Emilio Kong's performance in the GSAT after the results were announced at the Port Henderson Primary School in St Catherine, yesterday.
1
2
3
4

The Ministry of Education has indicated that the more than 800 students who did not turn up to sit the Grade Six Achievement Test (GSAT) will receive special intervention.

"We will be looking at those students and finding out why they did not come," said Education Minister Ronald Thwaites, as he addressed a press conference at his Heroes Circle office yesterday.

The minister went on to outline that weak academic performance may also account for some of the absences.

"What we are interested in doing is to make sure that they are placed in an appropriate school. Many of them we intuit but can confidently assess are those who were weak and would not have shown up for this reason and in that case they will have to be placed where they can get the best remedial attention," he added.

Thwaites also said the remedial attention would be child specific.

For her part, Chief Education Officer Grace McLean said the students who were absent from GSAT would be appropriately placed.

"The process that is used is that we look at the students continuous assessment score from grades four, five and six. We also look at the primary schools that they are coming from and where they actually live, and we use this information in collaboration with the parents to ensure that they are placed appropriately. While they would not have sat GSAT, they can't be in the primary school over age 13, so we have a responsibility to ensure that they are appropriately placed," she said.

In relation to the performance of students, Thwaites has vowed greater transparency in the management of teaching and learning outcomes.

"The teachers of grade-five students must take into account the perceived, now statistically verifiable weakness of their method of teaching and correct that ... . We are going for those where the greatest difficulty has manifested itself, the one thing we are not going to do in education anymore is cover up our deficiencies," he said.