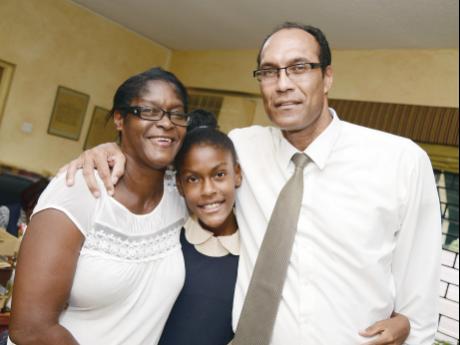 Hannah Farr has been a perfectionist ever since she started attending kindergarten.

However, a few years later, after sitting the Grade Six Achievement Test (GSAT), she never expected to receive perfect scores.

The Vaz Preparatory School student, who will be moving on to Campion College come September, told The Gleaner she cried uncontrollably after receiving her results yesterday.

“I was very anxious. I was actually crying before I got my scores and when my teacher told me that I got perfect scores, I cried harder. I couldn’t contain myself,” she declared.

“Both of my parents were crying, it was an amazing moment. I really want to thank them for their awesome support, they were behind me 100 per cent. Even if I got a low score during my mock exams, they never made me feel worse. It was their encouragement that kept me,” Hannah said. She noted that it had been a challenging journey, having to balance her track-and-field practices on Fridays with her academic efforts.

However, she was determined to pull through. “I would get to school at 7 o’clock in the mornings and was still here till 5 o’clock most evenings. I had to be at classes on Saturdays also and then on Sundays after church, I was in the books again, but I didn’t have a choice,” she said.

“On the day of the exam, the language arts made me think twice because I think some of the comprehension questions were a bit ambiguous, but I took my time and in the end it paid off,” the 12-year-old recalled.

Hannah’s father, Robert Farr, on the other hand, will need some days for his daughter’s success to sink in. “It has not settled in yet. I saw the scores but it will take some time for me to believe. I know she is a hard worker, but to get that kind of score is unbelievable,” he exclaimed.

“She is very strong-willed and determined. She hates to lose and so whenever she makes a mistake, Hannah will not stop until she gets it right,” he continued.

Hannah’s father added: “We made a decision however that we would not worry about the exams, after the exams, I told her that it was finished and I was behind her 100 per cent no matter what the results were. I am extremely proud.” Alecia Sawyers, Hannah’s teacher, said overall, the students’ performance exceeded her expectations.

“You make a projection in your mind as a teacher but this exceeded what I anticipated. For the first time, I am writing the scores and my hands were just shaking. Hannah did exceptionally well and she deserves every success because she is a hard worker,” Sawyers said. “Hannah redefines the whole concept of diligence.

She is an extremely dedicated student and she does not waiver in her focus. I remember on the day of the exam, she expressed cautious confidence. She has always been like that, not one to be over the top, but I was confident that she would have done well,” she said.