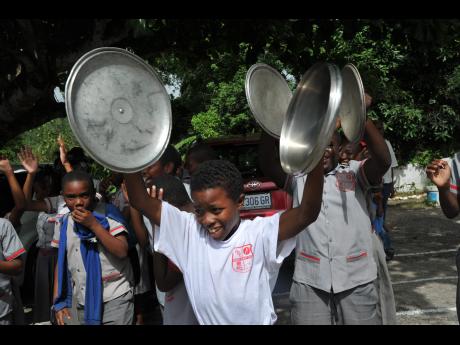 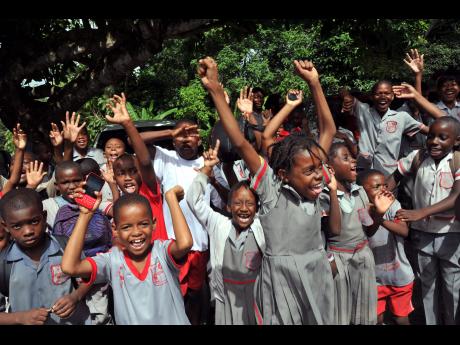 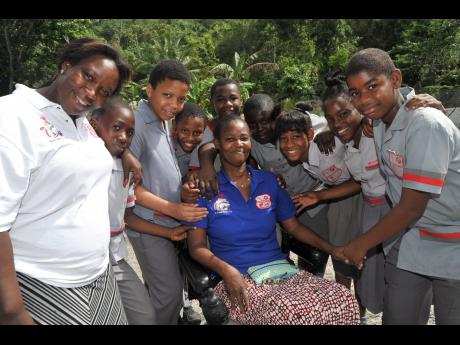 Norman Grindley
Principal Keisha Hayle (left) and grade six teacher Joy Smith (seated), with their students at Padmore Primary School in Padmore district, rural St Andrew, yesterday. The students are (from left) Jaheim Grant, David Henry, Richaldo Walker, Shamar Biggs, and David Waugh, who were all placed at Jamaica College, as well as Danielle Dunbar, who will be going to Campion College, Alethia Cornwall, who will be attending The Queen's School, and Brian Gordon, who was placed at Meadowbrook High School. 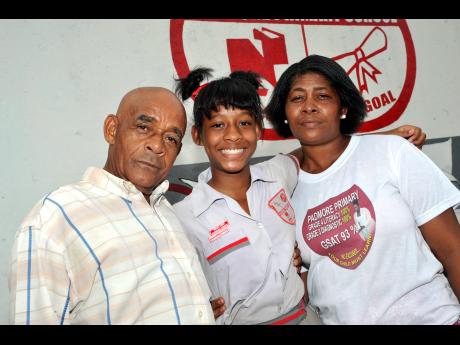 FOUR YEARS ago, the education ministry signalled that it was taking steps to close Padmore Primary, a school in the hills of St Andrew.

Principal Keisha Hayles said when she went to the 75-year-old institution in 2011 to oversee the closure, only 38 students were enrolled and the plan was to transfer them to another primary school that was being built nearby.

"They (the education ministry) told me before I came here that I was going to hold it for a couple of months, but they are going to close it down," Hayles recalled.

"They were saying the kids are not excelling, not many kids are here, and the leadership was weak," she said of the reasons given by the ministry then.

Fast-forward to 2015 and Hayles has led somewhat of a transformation at Padmore Primary.

She says for the first time in the school's history, one of its students - from very humble upbringings - will be attending the prestigious Campion College, also in St Andrew.

That student, 12-year-old Danielle Dunbar, is one of the 16 from Padmore Primary School who sat and aced the Grade Six Achievement Test (GSAT) this year.

Hayles said Dunbar averaged 99 per cent on the test with 100 per cent passes in science, social studies and language arts and 97 per cent in mathematics.

"We call her our 'Golden Girl'. If they had closed it down, this is one of the girls who would not have passed the GSAT," Hayles told The Gleaner.

She had high praises for Dunbar's parents, citing the numerous sacrifices they made to ensure the 12-year-old is able to pursue her education.

Come September, Padmore Primary School will also see five boys - who averaged more than 90 per cent on the GSAT - transitioning to Jamaica College and another girl, 13-year-old Alethia Cornwall, who will be going to The Queen's School.

Grace McLean, the ministry's chief education officer, confirmed that two years ago, the institution was on a list of schools that were to be closed, but praised Hayles and her staff for leading the turnaround.

"The principal reached out to the community and the private sector and raised the school's image. As a result, the school's enrolment has significantly improved, followed by the educational outcomes," McLean said in an email to The Gleaner yesterday.

"The ministry commends the principal and her teaching staff, with the support of the board, for the outstanding performance by students in this year's sitting of the GSAT," the chief education officer continued.

But Hayles told The Gleaner yesterday that the achievement, which has been a source of pride for residents in the small, close-knit community, was no easy feat.

She told of the long hours spent tutoring students while some parents, in return, took care of her personal chores.

"As the principal, I don't leave work until 7:30 or 8 o'clock at night time," she revealed. "We do extra lessons, and on Saturdays, I am here with them from 9 o'clock to four o'clock. On Sundays, I go to church, and after church, we meet [at the school] at 3 o'clock and I teach them until 6 o'clock," Hayles continued.

In return, she said some of the parents would go to her house and "cook for me, wash my clothes and clean my house just for me to come and teach their children".

Since the results were made public, Hayles says residents have been celebrating in the streets.

"They came out yesterday with their pot covers knocking. They are keeping a festivity on June 27 to celebrate the GSAT passes," she revealed.