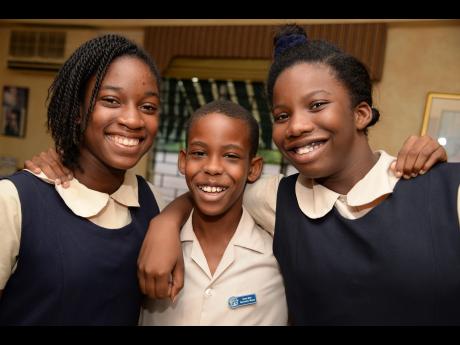 Jermaine Barnaby
Vaz Preparatory's Gavia Christie (left) Mathieu Rose (centre) and Deanna Fraser who all scored full marks in four subjects and 99 per cent in one subject in the GSAT exam. The trio will be attending Campion College, St. Georges College and Campion College, respectively.

With a shaky start at the end of grade five, into the start of grade six, teachers at the Vaz Preparatory School in Kingston, did not expect 42 out of the 79 students who sat the Grade Six Achievement Test (GSAT) to gain averages over 90 per cent.

Among the top students are Hannah Farr, who achieved perfect scores, in addition to Deanna Fraser, Gavia Christie and Mathieu Rose, who gained averages of 99.8 percent.

Principal of the school, Karlene Bisnott, in an interview with The Gleaner recalled that the year brought many challenges, but the hard work paid off.

"The general scores at the end of grade five were not very strong and so we were really concerned about where the students were in terms of reasoning skills and following simple instructions. As a school, we had to be very strategic right up to the examinations," she recalled.

"We needed this (GSAT success). It was a rough year for us. So many obstacles emerged that made us feel like we could not go any further. Quite a few of the students are coming a far way. At the end of the day, however, we made it," Coleman-Ray said.

beyond the call of duty

After seeing the results on Wednesday, Bisnott gave credit to the teachers who, she said, went beyond the call of duty. The principal, however, noted that mathematics needs urgent attention as many students fell down in that area.

"Teachers were to work three evenings for the week and they were working five days. On Saturdays, they were to be here from 9 o'clock to 2:30, but sometimes they were here until

5 o'clock, ensuring that every single detail was sorted out. The majority of them (students) got their school of choice," she declared.

Grade-six teacher Alecia Sawyers noted that parental support was commendable, adding that guardians must step up to the plate in ensuring that their children fulfil their potential.

"The parental support has been very good and I must applaud them. They want feedback and they are interested in every detail of the child's journey, and that is commendable and is a critical element towards a child's development," Sawyers said.