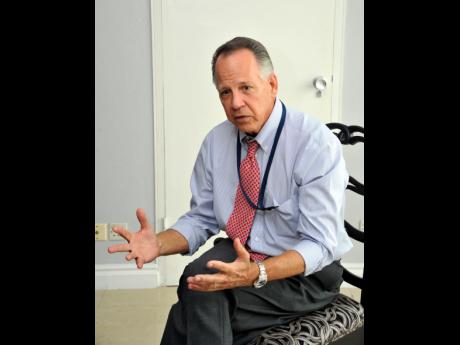 Jamaica's judicial system is now weeks away from having at its disposal a remote video-link system that will allow vulnerable victims and witnesses in highly sensitive cases to give their evidence from a location other than a courtroom.

Director of the International Narcotics and Law Enforcement section at the United States (US) Embassy in Kingston, Gary Rex, revealed yesterday that the equipment are now being installed and tested in one courtroom at the Supreme Court in downtown Kingston.

Rex, who is part of a group of US law enforcement personnel in the island for a workshop this weekend with local prosecutors, said the system would be handed over to the Jamaican Government in July.

"It allows witnesses and victims to testify in another room, another building or another country if necessary," he told The Gleaner yesterday in an exclusive interview.

The disclosure comes nearly three years after Jamaican lawmakers enacted changes to the Evidence Act. The amended Evidence (Special Measures) Act allows - with the permission of a judge - video evidence to be admitted in criminal and civil cases.

The amended legislation also allows for video-recorded evidence from victims such as children who were sexually abused to be admitted in court.

Justice Minister Mark Golding revealed yesterday that the regulations that will govern the legislation has been drafted, but said the rules of the court are still being prepared.

Llewellyn, the nation's director of public prosecutions (DPP), described the installation of the new system as a great step towards "neutralising some of the fears" harboured by vulnerable victims and witnesses.

"If we are living in a culture that unwittingly facilitates the 'informer fi dead' culture, then we have to find a way to neutralise some of the fears that vulnerable witnesses would have, and this is one great step in that direction," Llewellyn said.

Rex acknowledged that the use of technology was one way local prosecutors could get victims and witnesses to come forward, but cautioned against an over-reliance on it.

"Technology is not the magic bullet. It's not going to eliminate it [the problem of victims refusing to come forward out of fear], but it can support it [the efforts of law enforcement agencies to address this]," Rex explained.

Llewellyn said the video-link system also has practical benefits for the country as it could save on the cost of transporting accused persons to and from court for bail hearings.

She said these hearings could instead be done from police stations and other remand facilities and beam directly into the courtroom.

The two-day workshop starts today and will be attended by Llewellyn and all but two of her prosecutors. According to Rex, it will be used to share expertise on how to deal with what he called "very real and significant" problem of gangs and organised crimes in Jamaica.

"We'll be helping them to better respond to the challenges of gangs, both in terms of investigations and prosecution ... in order to raise the level of Jamaica's response to gangs," he explained.

Jeremy Shockett, chief of the trial bureau for the Bronx District Attorney's Office in the State of New York, revealed that Jamaica's anti-gang legislation is a similar model to the one used to prosecute gangs there.

"We are here just to share with local law enforcement and prosecutors what has worked and what hasn't worked and just to listen to their issues and figure out how they can best use their new law to figure out these issues," Shockett shared.

Since the start of this year, more than 500 persons have been reported murdered. According to the Police High Command, a little more than 50 per cent of them were gang related.