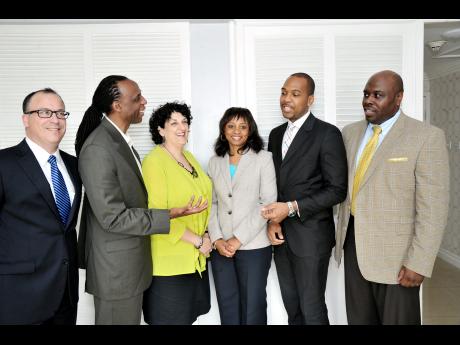 Jamaica's anti-gang legislation can be an "extremely effective tool" to

dismantle some of the country's most feared crime syndicates, a team of senior United States law-enforcement personnel has suggested.

But having used similar legislation to take down major criminal networks in New York and Chicago, members of the group have cautioned that if Jamaica is to have the same result it is going to require a culture shift in the thinking of the police, prosecutors, the judiciary and the communities where these gangs operate.

While appealing for citizens to be patient with local law-enforcement authorities, Wilford Pinkney Jr, a retired detective with the New York City Police Department (NYPD), said citizens, in return, must start seeing the criminals around them going to prison.

"Then you will see more of that trust that needs to exist between the system and communities," Pinkney Jr argued as the group sat down for an interview with The Gleaner last Friday.

"We have reviewed the anti-gang law ... we have met with a lot of people and the will is here to deal with the gang problem in a way that will eventually lead to dismantling, but I think we have to temper our expectations that this is the magic pill that's gonna change things in a short period of time," he asserted, in suggesting that local police should be "given more time" to reap results.

Police statistics have shown that gang-related killings accounted for more than 50 per cent of the more than 5,000 murders reported over the last five years.

Since the start of this year, more than 500 persons have been reported killed, and Police Commissioner Dr Carl Williams has said that criminal gangs were responsible for 50 per cent of those murders. As a result, divisional commanders have been directed to focus their efforts on disrupting and dismantling gang activities in their divisions.

But according to Pinkney Jr and Peggy Chiampas, a Circuit Court judge and former prosecutor in Chicago, the problem is not for the police alone.

Pinkney Jnr acknowledged that, like in the US and other countries, there is a trust deficit between the Jamaican police and residents in some communities and insisted that as part of the culture shift the 'informer fi dead' mentality has to become a thing of the past.

"The police alone introducing strategies to help enforce that [anti-gang] act isn't gonna make that change ... that's not going to dismantle a gang. I think the community is going to have to play a big part in that," Pinkney Jnr argued.

He also cautioned that it is going to take time for residents to see that "the police are serious, the prosecutors are serious and that the Government is serious".

For Chiampas, it is also going to require extensive investigative work and close cooperation and collaboration between the police and prosecutors.

"It's an investment ... . In Chicago, we have criminal drug conspiracy or criminal conspiracy statute, the framework of which is very similar to Jamaica's anti-gang legislation and it was very successful in addressing gangs, narcotics and organised crime networks," she revealed.

Another key aspect of the legislation, Chiampas said, is that it gives prosecutors an opportunity - with help from "less-culpable" individuals in a criminal organisation - to infiltrate that network "with an eye towards taking down all its members, taking its assets and whatever financial gains they have".

Jeremy Shockett, assistant district attorney for The Bronx, New York, said his office also has at its disposal legislation that is similar to Jamaica's anti-gang law and has used it to take down some very powerful crime syndicates.

"Almost 100 per cent ... and they get lots and lots of jail time," Shockett said of the conviction rate for his office.

Pinkney Jr recalled the early 1990s when the crime rate in New York City was at alarming levels and criminal gangs controlled many communities.

"When we went into [these] communities and conducted enforcement activities and we locked up large groups of people using laws very similar to yours, we saw a change. All of a sudden, streets where kids couldn't play, we had barricades up and kids were playing in the streets," he said.

"It felt good for us as law-enforcement officers ... but it was also good for the people in those communities that wanted those changes," he continued.