Saunders defends JDF use of mortars in Tivoli 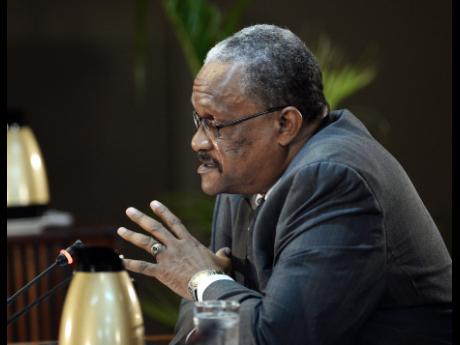 Following the army's admission that more than three dozen mortar rounds were fired in Tivoli Gardens during the May 2010 police-military operations, the Office of the Public Defender (OPD) has signalled that the commission probing the conduct of the operations will hear evidence that 13 "fragments of shrapnel" were found in the body of one victim.

Lord Anthony Gifford, the attorney for the OPD, identified the victim as Karl Henry, a young man who resided in Levy Path, an area close to one of the three open spaces in Tivoli Gardens where retired chief of defence staff Stewart Saunders said the mortars were fired under "observed and controlled" conditions.

Gifford told the West Kingston Commission of Enquiry yesterday that it would also hear evidence that in nearby Chang Avenue, "there were at least two explosions" that caused damage to properties.

"One went through a house," he noted.

"The commission will be getting evidence that a young man called Karl Henry was killed in that operation and that 13 fragments of shrapnel were found in his body and no gunshot [wound]," Gifford underscored.

Saunders, who was being cross-examined at the time, said he was not aware of either report, triggering an exchange with the OPD attorney.

"According to your evidence, that couldn't happen?" Gifford questioned.

"Not from my knowledge of the plotted things (course of the mortars) and the things I mentioned yesterday (Monday)," he replied, making reference to the strict conditions under which the mortars were used.

"When were mortars last used in real situations before this ... not training situations?" Gifford continued.

"You don't agree that particularly with operators who have not ever fired them in real situations mistakes can happen?" he questioned.

"Mistakes are possible, counsel, there is no doubt about that. But in this situation, I had no reports of anything like that happening," the retired army chief replied.

Saunders, who has acknowledged that the use of the mortars was entirely his decision, also denied a suggestion by Gifford that their usage in a situation where they have never been used before was "grossly irresponsible".

Meanwhile, Saunders revealed that he expected former Prime Minister Bruce Golding to give then Police Commissioner Owen Ellington advance warning of his decision to authorise the arrest of drug kingpin Christopher 'Dudus' Coke.

Saunders said he expected that Ellington would, in turn, notify him.

Instead, Saunders said he learnt of the decision to green light Coke's arrest on an extradition warrant through a national broadcast by Golding and admitted that the announcement took him by surprise.

He also testified that the deaths of 74 civilians during the operation aimed at capturing Coke was regretted. He, however, described the operation as a success.