Bloody hell: When doctors get it wrong 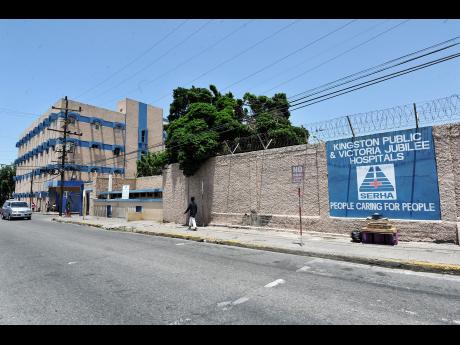 They are generally rated among the best in the world and many go the extra mile to save lives without thought of class, colour or status, but when members of the medical fraternity get it wrong, it can be horrible for patients as well as the nation's purse.

Over the past 10 years, taxpayers have been asked to shell out millions of dollars for medical mistakes and several more claims remain before the attorney general for settlement.

Here are a few of more than 65 claims filed with the attorney general in the past decade and captured by The Sunday Gleaner through the Access to Information Act.

Woman loses ovaries after sponge left in her following C-section

A caesarean section (C-section) at the Annotto Bay Hospital in 2005 resulted in a 26-year-old farmer losing her right ovarian tube and ovaries, after the doctors failed to remove a sponge from her body.

According to the St Mary farmer, medical officials at the hospital failed to detect the reason for her debilitating pains and other complications for nearly three years, despite her complaints following the C-section.

An ultrasound conducted in 2006 at a health clinic in the parish revealed the presence of a surgical sponge in her abdomen and she was instructed to go back to the hospital, where an operation was conducted and she was told no foreign body was found.

She turned up back for treatment at the clinic in 2008 after she started experiencing swellings and was referred again to the Annotto Bay Hospital, where an X-ray was conducted and revealed the presence of the surgical sponge.

She was made to undergo an emergency surgery, and in the process, her ovaries were removed, thereby depriving her right to future pregnancies.

A 24-year-old beautician from St Ann sued the Government after she was wrongfully diagnosed as being HIV-positive when she accompanied her spouse to the St Ann's Bay Health Centre to collect the results of his blood test in 2004.

The woman was encouraged by staff at the clinic to take a test as well while she waited. However, upon entering the designated area for testing, she was told that a blood sample that she had already given was tested and showed that she is HIV-positive.

Despite telling the staff that she had never given a sample of her blood at the clinic, she was shown a file with her name, date of birth and address and the results of a blood test showing she was HIV-positive.

In 2005, the beautician visited the St Ann's Bay Hospital, where a blood sample was collected from her and later showed that she does not have HIV. Subsequent blood tests yielded similar results.

She claimed she received personal injuries, emotional stress, isolation, loss of income, and ridicule as a result of the wrong diagnosis.

A 44-year-old manicurist was given the shock of her life when she woke up after doing an abdominal hysterectomy in 2008 at the St Ann's Bay Hospital to find her breasts badly burnt.

She was informed by the doctor who carried out the surgery that her temperature had dropped during the operation and a heating pad was placed on her chest to raise it.

She was also informed by the doctor that he had to improvise as he kept on asking for the correct equipment, but none was provided. The claimant said her breasts got badly infected and upon asking a nurse for something to help, she was told to go to the sea and bathe.

After writing to the hospital's chief executive officer some months after, she was told she could have plastic surgery done at the Cornwall Regional Hospital at no cost to her, but upon visiting that hospital, she was told the surgery could not be done as her breasts were still inflamed.

She made a second visit to Cornwall Regional by ambulance some weeks after, but left without doing the plastic surgery after she was told by the nurse who accompanied her that the ambulance could not wait for her.

A woman who was admitted to the Spanish Town Hospital for treatment of a miscarriage in 2011 had her uterus accidentally removed, purportedly in the process of treating the miscarriage.

Her uterus was removed without her knowledge, authorisation or consent.

In 2013, a teacher from St Catherine sued the board of management at the Spanish Town Hospital after her mother fell from her bed at the hospital and suffered spinal shock and fracture of the cervical spine, which caused her death.

According to court documents, the senior citizen was also administered several unwarranted doses of insulin, causing hypoglycaemia, which also contributed to her death.

The teacher, among other things, claimed for a reimburse-ment of funeral expenses to the tune of $492,000.

A man's visit to the May Pen Hospital to have his right inguinal hernia surgically repaired has resulted in a life of misery.

The man spent four months in a comatose state in hospital and experienced heart failure on at least three occasions after the surgery. He was later diagnosed as having a perforated bowel and was told by doctors that his intestines had been accidentally cut during the hernia operation.

As a result of the botched surgery, the man, who was a mason, has not been able to work and now has to wear adult diapers. He has undergone several surgeries to correct the problem, but his condition remains dire.

A man who injured his right leg after he fell into a gully while sitting on a chair is seeking more that $3 million in special damages plus other damages after his leg was amputated at the Kingston Public Hospital (KPH).

The man, who had an open wound just above his right ankle following the fall, was taken to KPH, where his wound was cleaned and an injection administered to ease the pain.

The complainant waited for hours before his wound was stitched up and he was sent home. He went back to the hospital eight hours later when he realised he was bleeding and still feeling pain, but he received no further treatment until the following day.

He was told a day later that his leg would have to be amputated to remove infected tissues and awoke after surgery to find his leg amputated below the knee. He was then assessed and told he would need to undergo a second surgery, which resulted in his leg being amputated above the knee.