Fathers United for Change determined to make a difference 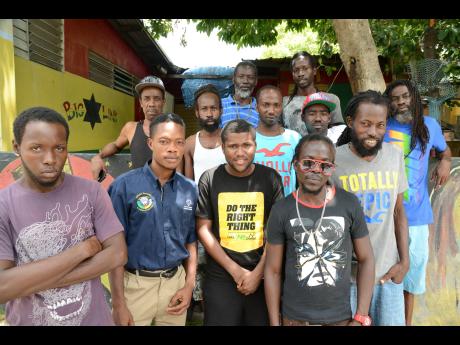 Rudolph Brown
Members of Fathers United for Change pose for our camera as they declared their commitment to breaking the cycle of violence in their community.

In a community where musicians and gunmen seem equally respected, the Trench Town-based Fathers United for Change has managed to get some of the young men to choose music over guns as a means of getting out of poverty.

Headquartered at a small studio in the section of Arnett Gardens dubbed Angola, the all-male group represents one of the tangible outcomes of a peace meeting that was hosted several years ago in the often volatile community. However, the group wasn't officially launched until 2012, following parenting workshops hosted by the Joy Town Development Foundation (JTDF) and the Citizen Security and Justice Programme (CSJP).

"Men have been dying and killing off each other for years upon years now. We as men, if we don't break the cycle, then the cycle won't break, and we will be watching our sons and grandsons killing each other the same way," explained president of the group, Curtis Robinson.

With the support of the CSJP and JTDF, Fathers United for Change has managed to enrol 23 young men at HEART Trust/NTA, 17 in an internship programme at the Jamaica Defence Force, and 25 more males between the ages of 17 and 70 in a literacy/numeracy class. It is hoped that these men will become the catalyst for change in the community.

Father of four and public relations officer for the group, Trevor Edmondson, said members are often invited to give motivational talks at schools in the area. A homework programme that was started by the group has further contributed to setting children on the path for a better future.

"Man try mash up the community with them gang violence ennuh, but because of the pace that we set and with the help of other people, that sort of dead out," said Edmondson, who was shot during a gang flare-up and now encourages dons in the area to send young men to join the group.

Having the studio has been a great incentive, as there are many aspiring artistes in the community who will grasp at any opportunity to get their names on a record label.

"I feel that if the studio wasn't here, we wouldn't have Fathers United for Change," said Edmondson.