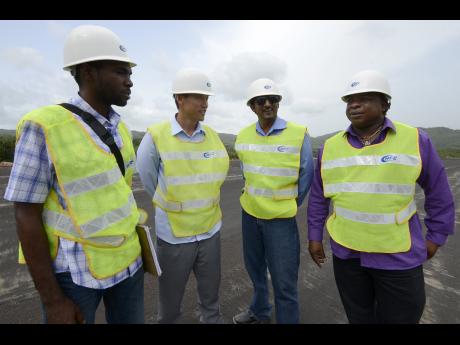 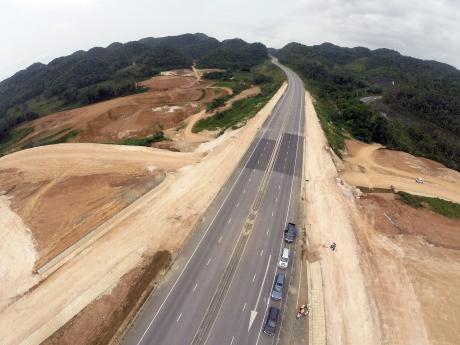 A stretch of the North-South Highway through the hills of St Catherine.
1
2

China Harbour Engineering Company (CHEC) is promising that when the other stages of the North-South leg of Highway 2000 are complete, they will be part of the most modern roadway in the country. In addition, concerns about steep inclines such as the one in the Linstead to Moneague leg will not be an issue.

The three legs now being worked on, including the Linstead to Moneague segment, will form one continuous highway and will take motorists across the hills of St Catherine into Mammee Bay, St Ann.

The CHEC representatives boasted about the quality of the highway as a Sunday Gleaner team toured sections of the unfinished roadway.

Ryan Smith, assurance and quality-control engineer manager for the North-South Highway project, said the eight per cent gradient which was a major complaint about Section Two of the highway, did not feature in the company's plans for the other sections of the highway.

"We will not have a gradient that high for such a long stretch of the roadway. Maybe just at Mammee Bay to come up, motorists may encounter a similar eight per cent grade, but it will definitely not be as long as Section Two, and definitely not higher, as that is not apart of our design," said Smith.

He said CHEC was forced to include the eight per cent gradient on the Linstead to Moneague leg due to the "geotechnical nightmare" the company encountered when it took over the project from the French firm Bouygues.

"When we took over the construction for the road, in the space of a kilometre, we found three different types of material in the soil - from solid rock to shale to sandy loom to dirt and stones mixed together. That transition in such a short distance was a geotechnical nightmare", explained Smith.

He said CHEC made the adjustments to not only improve the highway, but also the safety of the communities which sat below it.

"We had to use soldier piles to increase the stability of the construction because it's on the edge of a mountain with communities below. We had to ensure that the embankments were stable, with proper drainage in place, so that communities below the highway aren't affected by land slippage."

Jin Fu Zhu, deputy project manager of the North-South Highway, was quick to point out that the non-replication of the eight per cent grade was not the only change motorists will notice once the roadway is complete.

"The North-South Highway is going to offer commuters greater convenience, and what we mean by that is what happens now on the East to West Highway, where the commuter is forced to stop and pay a toll at three different toll plazas, will not happen on this highway," explained Zhu.

"What is going to happen is that when motorists enter the highway, they will go through a toll booth and receive a ticket. They will be able to drive the entire length of the highway and will only pay when they choose to exit the highway at whichever interchange."

Zhu said plans are also in place to increase the payment options for the use of the highway.

"Our hope is to build a highway with the most modern conveniences, so drivers will be able to use cash, pay by tags, and even credit and debit cards as well."

The entire North-South Highway will be open to the public by mid-2016 and is expected to reduce travel time between Caymanas in St Catherine and Mammee Bay in St Ann to just 45 minutes.