NWC gets tough on water breaches 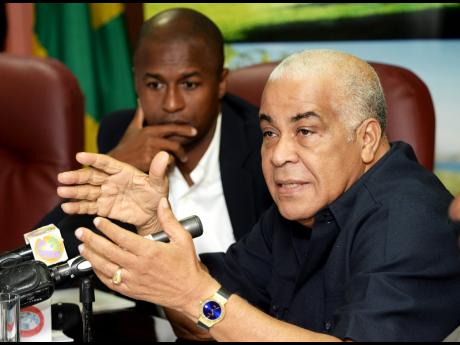 AS LARGE sections of the country are now facing severe drought conditions, the National Water Commission (NWC) is vowing to get tough on persons who breach a proposed prohibition notice set to take effect on July 6.

The notice has signalled that the NWC will be introducing more stringent water conservation measures due to a deficiency in the supply of water.

Minister of Water, Land, Environment and Climate Change Robert Pickersgill yesterday warned that the Government would be taking strong action against persons who breach the terms of the prohibition notice.

Pickersgill admitted that in the past when water restriction notices were announced, the NWC did not clamp down on persons who violated the order.

The water minister said the Government would not sit idly by and allow events such as water parties to continue, even if the water is from private sources, as this would send a wrong signal at a time when the country was experiencing severe drought.

He was speaking yesterday at a press conference to address drought conditions affecting the country.

Town Clerk Robert Hill suggested that greater restriction should be placed on the use of water for pool parties during periods of severe drought.

However, he said the Kingston and St Andrew Corporation could not deny granting permits to persons who wished to hold these events, without first taking the matter to the Corporation's committee for a policy position. He said when the committee next meets the issue would be highlighted for deliberation.

Under the prohibition order, persons are banned from watering gardens, lawns, grounds and farms with water supplied by the NWC.

It also restricts persons from refilling or supplying tanks, ponds, or swimming pools. The watering or washing of roadways, pavements and garages are also restricted.

Persons who contravene the notice are liable to a fine on summary conviction before a Resident Magistrate. In default of payment, the offender could be sentenced to a term of imprisonment not exceeding 30 days.