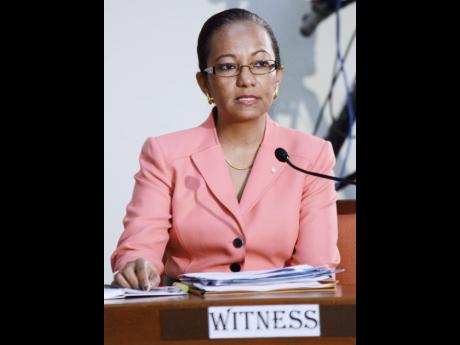 A SENIOR government official has conceded that the nearly $100 million paid out to residents of west Kingston who were displaced during the May 2010 police-military operations in Tivoli Gardens was not compensation.

Instead, Permanent Secretary in the Ministry of Labour and Social Security Collette Roberts-Risden told the West Kingston Commission of Enquiry yesterday that the $97.2 million paid out to the residents four months after the operation was in response to a humanitarian need.

"There was a need, a welfare need," Roberts-Risden said during cross-examination by attorney-at-law Alexander Williams, who is representing several Tivoli Gardens residents.

"The government of the day decided to respond to that need ..., and did so without reference to liability, am I correct?" Williams questioned.

"As far as I am aware, yes," the permanent secretary replied.

Roberts-Risden, who was director of social services in the ministry at the time, revealed that $92.8 million was paid out to residents of Tivoli Gardens, Denham Town, Hannah Town and Fletcher's Land. In addition, she said $4.4 million was paid out in funeral assistance to relatives of those persons who died in the operations.

The permanent secretary testified that an assessment conducted by her ministry revealed that 94 houses were totally destroyed during the operations, while 200 were severely damaged. She said that 1,505 houses had minor damage, and 271 had what was classified as 'other' damage.

Further, she said that the $92.8 million included $13 million paid to vendors whose goods perished in the fire that destroyed a section of the Coronation Market.

But seeking to question how government funds were spent, attorney for the Jamaica Defence Force, Linton Gordon, cited payment records provided by the social security ministry which showed that $18 million was paid to 72 persons who gave their addresses as 1 McKenzie Drive.

Roberts-Risden acknowledged that this was the old Public Works Department building in a section of Tivoli Gardens known as Rasta City.

"Some of the persons you assisted may have lived in government buildings?" Gordon questioned.

"They may have," the permanent secretary replied.

"You categorise those persons as having lost their homes," Gordon questioned.

The enquiry is scheduled to continue on Monday when more residents of Tivoli Gardens will be called to give evidence.