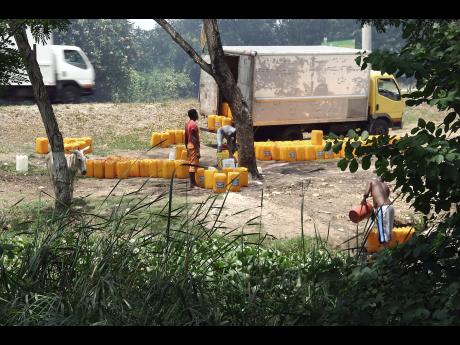 Christopher Serju
Men collecting water from the Duhaney River at Ferry in St Catherine on Thursday.

"BEWARE OF who you buy water from" is the strong warning from Basil Fernandez, managing director of the Water Resources Authority (WRA), who is concerned that public-health safety standards could be compromised as restrictions force people to source water from non-traditional sources.

His comments came in the wake of reports that more people are trucking water from the Duhaney River, located in Ferry, St Catherine, near to the Riverton City Dump.

"As far as I know, it's badly polluted, so it can't be used for anything else but to wet roads, put out fires, or something like that," Fernandez told The Gleaner on Thursday. "As the drought worsens, unscrupulous people are likely to take water from untreated sources to try and sell to people outside of Kingston, and people desperate for water might use it, so beware," he cautioned.

The Water Resources Authority head was responding to a report that men were seen extracting water from the Duhaney River at about 11:25 on Thursday morning. At the location, a hose was used to fill a 'tanker', after which, three young men were observed filling a number of five-gallon plastic containers for transportation in another vehicle.

"This is an illegal abstraction," Fernandez told The Gleaner after a photo of the men in action was sent to him. "However, the question is: What is the water being used for? I think that the public must be aware that persons will be selling polluted water and must be very careful of where they obtain water."

He later confirmed that no licence had been granted to the person in question to abstract or use water from the Duhaney River.

A police source also told The Gleaner that a number of persons had been arrested for taking water from this very polluted source.

In fact, pollution of the Duhaney River is one of the issues of concern raised by the National Environment and Planning Agency (NEPA) in a correspondence to the new board of directors of the National Solid Waste Management Authority (NSWMA).

"A proper drainage system needs to be implemented. This is of the utmost concern as leachate is currently observed aboveboard and is currently draining into the Duhaney River," NEPA stated in a letter to Dennis Chung, chairman of the NSWMA board.

Leachate is essentially the liquid that drains or leaches from a landfill, or in the case of Riverton, a garbage dump. It varies in composition depending on the type and volume of waste on site and usually contains dissolved and suspended pollutants.