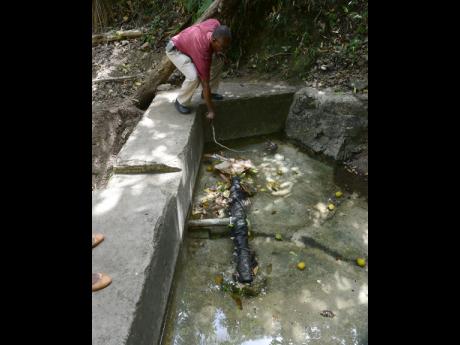 Ian Allen
A resident shows how little water there is in a catchment in Sunning Hill, St Thomas. 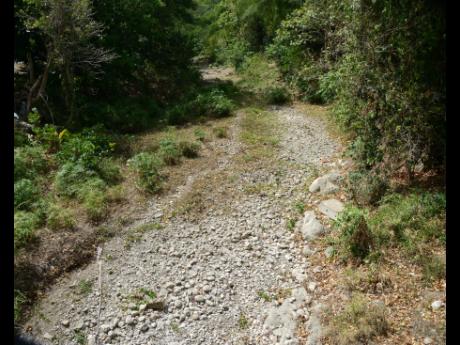 Ian Allen
A dry riverbed through which water was running just weeks ago. 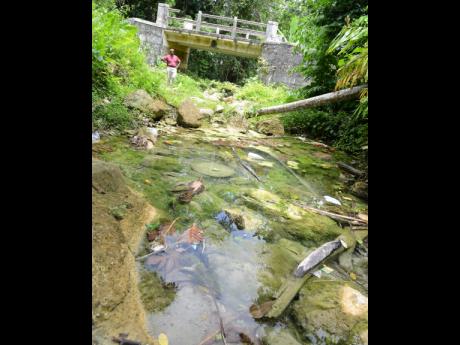 Ian Allen
A depleted stream in Rowlandsfield, St Thomas, near where some residents take baths.
1
2
3

The Rowlandsfield facility in St Thomas was empty, while at other catchment areas the water level was less than two inches, a testament to the severity of the water crisis in Jamaica's most eastern parish, when The Gleaner news team visited on Friday.

Concerned residents and several persons in authority echoed sentiments of worry, shock and despair as they contemplated the future, especially in light of government-imposed water restrictions which took effect today.

Customers in the Corporate Area are now receiving piped water between the hours of 4 a.m. and 8 p.m., while the water supply from Tulloch Springs to Portmore, St Catherine, is being restricted between the hours of 9 a.m. and 5 p.m. on weekdays, until further notice. This is part of the Government's short-term measures to address the impact of the lingering drought and reduced inflows into storage facilities.

However, it was a pronouncement by Robert Pickersgill, minister of water, land, environment and climate change during a press conference last Wednesday that has National Water Commission (NWC) customers in St Thomas really concerned.

"Customers are, therefore, urged to conserve on their use of water."

How they will conserve what they don't have is the quandary facing the St Thomas communities, many for which farming is the main source of a livelihood, with the demand for irrigation putting further stress on an already depleted resource.

Oral Bryan, chlorinator at the Rowlandsfield catchment, told The Gleaner that conditions are the worst he has ever seen.

"The catchment dry, dry, dry. From about May, things get really difficult here. Last year, was rough, too, but what I did was to regulate the water so that it could last. However, nothing is left now," said Bryan, who lives in the area.

Meanwhile, Fritzburke Allen, superintendent in charge of the Minor Water Supply in the parish, said that based on his observations over the past few years, the drought conditions have been compounded by poor environmental practices employed by farmers, especially in recent times.

"We always had water. However, since the last three years or so, bad farming practices have got worse, and with the current severe drought conditions, the consequences are haunting us," he lamented.

Allen pointed to several catchment areas, including Aeolus Valley, Sunning hill, Rowlandsfield, Water Valley, Pear Tree River and Beacon Hill that have dried up completely or are on the brink of becoming parched.

"If you go to most of these areas, you will realise that extensive farming is taking place. We have spoken to farmers and residents on several occasions imploring them not to farm in these areas. However, they continue to slash and burn, cut down the trees, and that has been a critical contributor to the crisis we are now experiencing," he said.

And the situation is worsening, Allen added.

"For example, in previous times, I never had to truck water to Sunninghill, because even in the severest of droughts, that area always had water. But it's a different story this year. The days are so hectic, having to ensure that the areas have water, and it is very costly. People come to the office complaining every day because the water shortage is becoming unbearable."

When The Gleaner visited the Mammee River in Gordon Town, St Andrew, on the same day, the accumulated impact of poor environmental practices was evident, as the once vibrant river was reduced to a mere trickle.

Despite news from the Jamaica Meteorological Service that July is projected to be one of the driest months this year, Kemar Reid is praying hard for a heavy shower of rain.

"I live close to the river and I usually stay from my gate and see it and even hear it. Now, sometimes I don't even remember dat a river over there; it run low bad," he said.

"As a community we used to look forward to swimming and having fun at the river during the summer. People from all 'bout would come here to swim, but di river a get lower and lower."

Dr Michael Taylor, director of the Climate Studies Group, Mona, noted that promotion of good environmental practices would be critical to mitigating the effects of climate change.

"We are not able to say that this current drought is climate change related. However, what we can say is that when we begin to see a pattern emerging it is one of the many factors that can be attributed to the phenomenon, and certainly one of the patterns we have seen emerging, is a strong variability in the rainfall pattern," Taylor told The Gleaner.

"Climate impact can also be compounded by bad environmental practices. The frequent droughts will cause less ground water and slowing down of the river but when we compound that by cutting down the trees, it now exacerbates the climate condition."

He added: "If we consistently dispose of garbage the wrong way, when it rains and there is flooding it is even worse because the drains and other areas are clogged. It is, therefore, imperative that we promote good environmental practices, as it serves as a buffer and does lessen the impact of climate change."