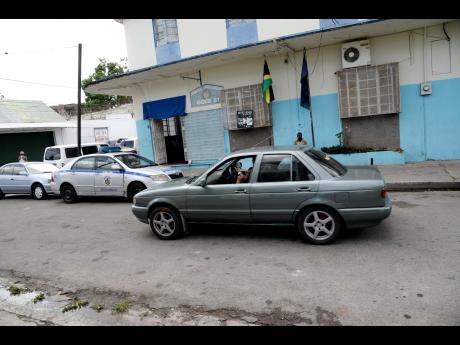 Jermaine Barnaby
This green Nissan moto rcar was seen breaking the one-way just outside the police station along Gold Street in Kingston yesterday. 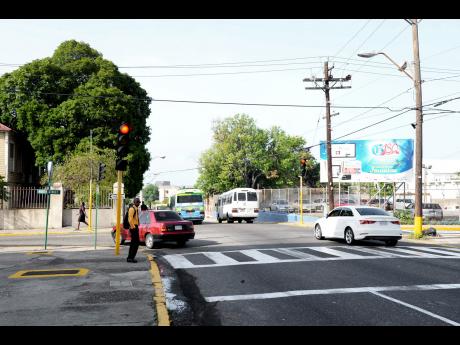 Jermaine Barnaby
At least two vehicles were caught breaking the red light at the intersection of North and East streets in Kingston. 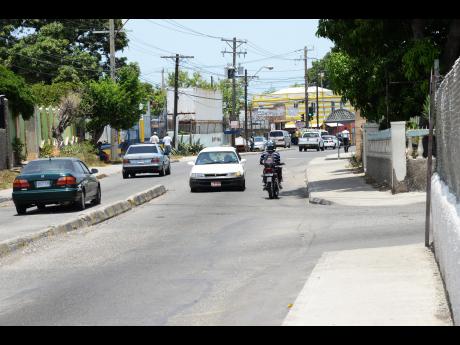 Jermaine Barnaby
This motorcyclist was caught making his way down Maxfield Avenue on the wrong side of the road. 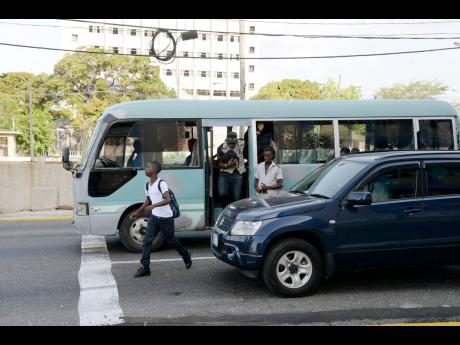 Jermaine Barnaby
Passengers disembark from a coaster bus at the traffic light at the intersection of North and East streets.
1
2
3
4

THE GREEN Nissan motor car heading north along Gold Street in downtown Kingston yesterday morning hardly caused a stir, not even when it drove past the police station.

The problem is that Gold Street is one-way, heading in the other direction.

The Nissan escaped the attention of the policemen and women on duty at the time, but chances are, even if they saw it, the driver still would not have been prosecuted.

It was one of the many acts of indiscipline and disregard for the rules of the road seen throughout sections of the Corporate Area yesterday. The police and other stakeholder groups believe this indiscipline is helping to fuel the carnage on the nation's roadways, which has resulted in an eight per cent increase in road fatalities this year.

In less then two minutes, on Wildman Street, also in downtown Kingston, our news team saw several vehicles heading in a northerly direction. Wildman Street, too, is one-way, heading south.

Our news team saw a female driver travelling east along Sutton Street, near its intersection with Wildman Street. Asked if she knew it was a one-way, going in the opposite direction, the woman placed her hand over her mouth before admitting, "Mi neva know".

Despite this, head of operations for the Kingston Central Police Division Deputy Superintendent Errol Adams said the Police Traffic Division has indicated that "they have not been doing much prosecution, if any at all" along both roadways.

While acknowledging that ignorance of the law is not an excuse, Adams said the absence of directional signs was a major issue in some areas downtown.

"What I am learning now is that as soon as they try to put signs into these areas, the guys dem take dem down. We could talk to the authorities, firstly, to re-erect the signs, thereafter, we would have grounds for prosecution," he reasoned.

"Ignorance is no excuse, but to be fair to the public, the signs ought to be up. So the first action is to see how quick we could have the signs up in these areas," he underscored.

Statistics compiled by the National Road Safety Council (NRSC) show that 178 persons have died in 165 fatal crashes this year. One hundred and sixty-five persons were killed in 155 fatal crashes for the corresponding period last year.

The statistics also showed that 53 motorcyclists were killed on the nation's roadways between January 1 and the first week of this month, making it the largest category of road users killed in crashes. Pedestrians are next with 41.

On Maxfield Avenue in St Andrew, our news team saw a man driving his motorcycle south towards Lyndhurst Road in the right lane being used by vehicles travelling north.

At the intersection of North and East streets - a hot spot for motor vehicle crashes - several drivers were seen driving through red lights.

impunity for the rules

Vice-chairman of the NRSC, Dr Lucien Jones, said the impunity for the rules of the road is reflective of the general indiscipline throughout the society.

"People are driving how they live and they are living very dangerously," he underscored. "People don't obey stop signs, enuh. I see people, with impunity, drive through red light on a Sunday when there is no rush," he said.

Head of the Police Traffic Division Senior Superintendent Calvin Allen agreed, saying the majority of the accidents this year are the result of human error, sometimes caused by indiscipline.

"Without the police presence, people just operate with scant regard for road traffic signs and signals ... . People just don't seem to want to wait; everybody is in haste," he underscored.

As an example, Allen indicated that he was in possession of a report that showed that one man - a bus conductor - was recently held on 91 outstanding warrants.

He said despite very limited resources, this has forced the police to maintain a presence at major intersection throughout the Corporate Area to help regulate and create order where traffic lights are already installed.

But he warned that the police, in collaboration with the Island Traffic Authority, would be ramping up their enforcement activities.

"I know that the public would like to see much more than they are seeing ... . Come as early as next week, I will be leading a team into a particular parish in order to give support to traffic officers there," he said without divulging the parish.