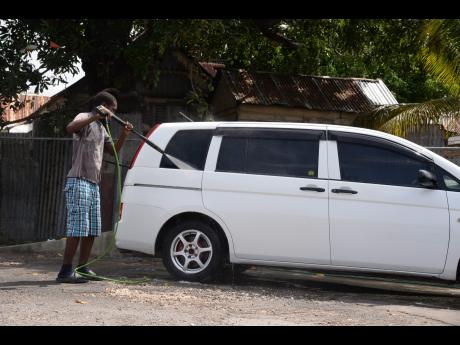 Jermaine Barnaby
A hose is used to give this car a good wash-down. 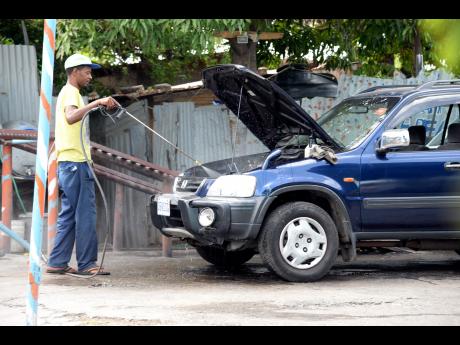 Amid concerns about the worsening drought conditions, the National Water Commission (NWC) has signalled that it is ready to enforce the nationwide ban on the washing of cars and other non-essential use of the scare commodity.

A week after the Government instructed the NWC to issue a prohibition notice barring citizens from watering lawns and washing vehicles, among other things, the utility company revealed yesterday that it is now sharing details of the law with the police and working out an approach to enforce it.

"We just had a meeting with the police on Monday, and we will be relying on the services of the [Jamaica Constabulary] Force to actually help us to monitor and, where possible, prosecute those found in breach," acting NWC president Mark Barnett said yesterday.

"In instances where people don't want to do anything different and refuse to take any steps to curtail their breach, we will apply the full force of the law," he added.

He sought to clarify that it was not a reluctance to enforce the prohibition, but more to focus on the objective of the law.

Up to yesterday, the Mona Reservoir was at 28 per cent of capacity while the Hermitage Dam was at 38 per cent.

The prohibition notice was issued last Wednesday, but it has not stopped the operators of several car washes in the Corporate Area from doing business.

how we ago eat?

At Speedy's Car Wash, located at the corner of Charles and Hanover streets, in downtown Kingston, our news team saw several vehicles lined up as an attendant washed another vehicle. The owner of Speedy's, Richard Dwyer, explained that his business was using water purchased from a private source and, therefore, was not in violation of the law.

Dwyer said some time ago he took the decision to invest in a tank so that whenever water is unavailable, for whatever reasons, it would not impact his business.

"At the end of the day, if the business stop, how we ago eat?" he questioned.

It was a similar story at Mega's Car Wash, located on Lockett Avenue in central Kingston, where the operator Michael Barnett indicated that the water being used was taken from a spring in the community of 'Southside' in downtown Kingston.

Barnett said he had no problems with the prohibition, but wanted to know whether the NWC would go after persons who purchased their own supply of water.

"That water is not drinking water, so what we suppose to do with it?" he questioned.

The acting NWC president explained that persons who purchased their own water supply and had the receipts to show, have nothing to worry about.

"The persons purchasing water outside of the realms of what we distribute, the law does not allow us to take any action against those persons," Barnett explained.