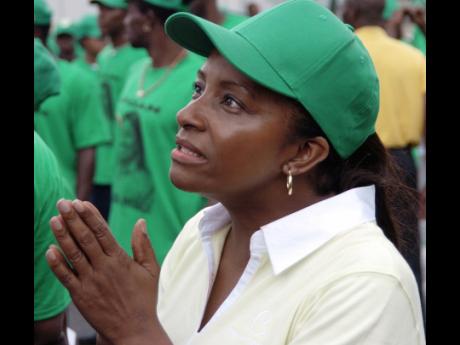 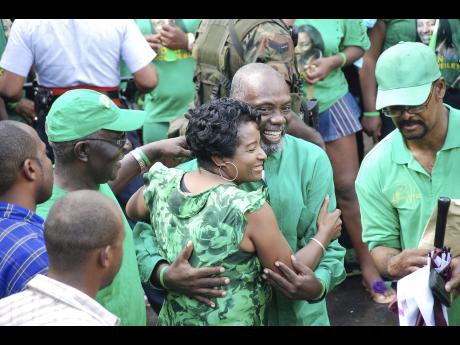 File
In this 2011 file photo Joan Gordon-Webley embraces the man she replaced as the JLP standard bearer in East Rural St Andrew, Joseph Hibbert, who has since died. 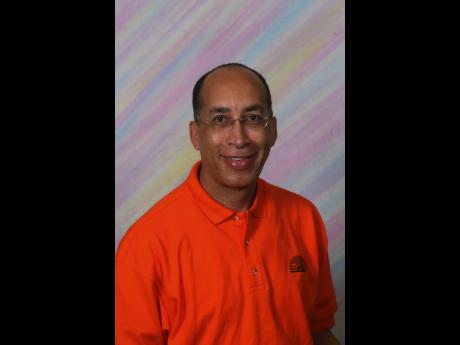 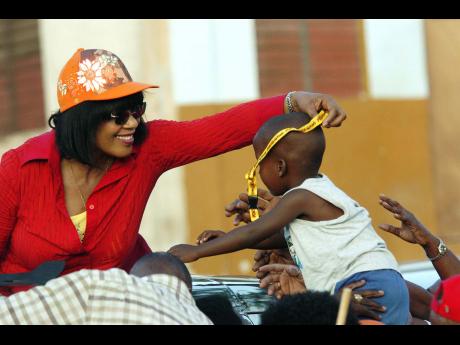 Over the past decade or so, the leadership of the People's National Party (PNP) has opened the door of its Old Hope Road headquarters to approximately 15 Jamaica Labour Party (JLP) refugees.

Although wary, the Comrades have kept quiet in the face of decisions to embrace the former political adversaries since 2006.

But for many Comrades, the welcome mat laid out for political firebrand Joan Gordon-Webley is taking things too far.

"Joan is really hard to ingest," declared Terrence Gibson, a PNP activist from South West Clarendon. "But we are the People's National Party so I guess that's what the 'people's' stands for."

The concerns of the Comrades are many and varied, influenced by the different periods since Gordon-Webley first ran on the JLP ticket in the tumultuous 1980 general elections.

There have been whispers of unease in the past as JLP diehards began the trek from Belmont Road to Old Hope Road, but these have, since last week, been transformed into trumpets of protests.

Veteran politician Delano Franklyn is one of those protesting loudly. He referred The Sunday Gleaner to his position on the social network Facebook.

"I disagree with the decision of the executive of the PNP to admit Mrs Joan Gordon-Webley as a member of the party. Among others, I do so for two primary reasons: the bloody campaign of 1980 and the labelling of the current party president as a 'Jezebel'. I rest my case," said Franklyn.

"That is my position and what I stand for. The reason that I can state my position in no uncertain terms is because I have been inundated with calls from persons wishing to know my position, and by stating it, I hope there is no one who is now not clear on my position."

The PNP Youth Organisation has also expressed concern. "... we believe that this move will not advance the PNP's public image, but on the contrary, cause many Comrades to contemplate their continued membership in and support for the People's National Party.

"We have made a formal appeal to the party's general secretary and we anticipate that this matter will be reviewed by the party's National Executive Council at the next meeting later this month," said Alric Campbell, president of the youth group.

Gordon-Webley fully understands the concerns of the Comrades and has moved to calm the waters.

"I am ... mindful of those Comrades who have expressed some consternation about my membership. This is totally understandable and acceptable. It was never my expectation that after serving as long as I have in another political party this move was going to be without criticisms, from both sides," said Gordon-Webley late last week.

"Politics in Jamaica, like anywhere else, requires patience and fortitude; it is not for the faint-hearted. I, therefore, do not intend to be thin-skinned or dismissive of any views, but rather will make myself available to discuss and clarify matters of concern to any member of the party."

For political historian Troy Caine, Gordon-Webley is a good catch for the PNP and bad for the JLP. "I have always been impressed with her politics and charisma, which may be a little too much for some PNP supporters," said Caine.

He noted that several "prominent and unusual" political personalities have defected, including Rose Leon and Ken Hill of a past era. "So this is something that we must keep in mind."

While Caine is of the view that there is a numerical balance in persons defecting from either of the two political parties, present-day Comrades have raised the red flag on what they characterise as the "greening" or "labourisation" of the PNP.

Hanna succeeded PNP member Aloun Assamba in the PNP's political stronghold of South East St Ann, despite efforts by some diehard Comrades to keep her out. She has since assumed the chairmanship of the PNP Region One.

After defecting from the JLP, Hayles ran on the PNP ticket in Western Hanover and is gunning for the position of chairman of the party's Region Six.

It was Dabdoub who, as a "converted" Comrade, set his former party in a tailspin when he hauled Daryl Vaz before the court in the first of a series of dual-citizenship battles in the aftermath of the 2007 general election.

Political neophytes, including Verna Parchment, who sent the PNP stalwart Arnold 'Scree' Bertram into retirement, also fled the JLP to a new home among the Comrades.

In a similar fashion, former G2K member, Ashley-Ann Foster, has turned away from the JLP and seems set to take on Edmund Bartlett in East Central St James.

Then there are Norman Horne, Patrick Atkinson and Benny White, who have etched marks for themselves in the PNP.

Some Comrades believe that this is at the expense of party workers who have carried the torch late at nights into the 'Rising Sun'.

This also turned out to be another futile attempt by Horne, who got the blessing of the PNP leadership to assume the influential party position of treasurer before his recent resignation.

A former member of the JLP, Atkinson, a lawyer by profession, turned away from his first political love to help bring down then Prime Minister Bruce Golding in the Manatt, Phelps & Phillips fiasco that was the catalyst for the JLP's electoral demise in 2011.

He was rewarded with a candidacy in Northern Trelawny and emerged as the member of parliament, and that parachuted him to the vaunted position of attorney general.

Comrades have also not forgotten that publisher Lloyd B. Smith challenged pure-bred Comrade Derrick Kellier for the South St James seat before switching sides, successfully contesting the Central St James seat for the PNP in 2011. He is now the deputy speaker of the House of Representatives.

Former Morant Bay mayor in the JLP, Rosemarie Shaw, who was active in PNP presidential election, ran in 2007 against James Robertson.

Also at the local government level, White defected to the PNP to emerge mayor of Port Antonio, while councillor for the Riverside division in Western Hanover, Lester Crooks, jumped ship and joined the ranks of the PNP.