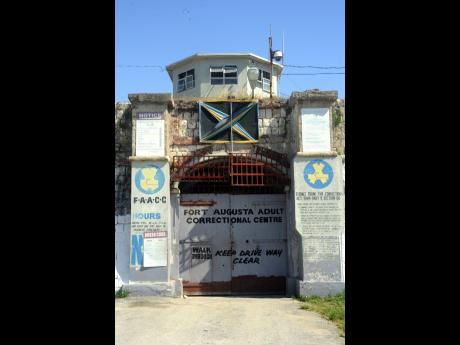 File
The Fort Augusta Adult Correctional Centre where the prostitute could have been sent for having sex with a minor.

A 29-year-old woman escaped prison time last week despite pleading guilty to having sex with a 14-year-old boy.

Facing the possibility of as many as 15 years in prison, the woman, Rice Johnson*, of a Manchester address, was given three years probation after she earned the sympathy of the court with a tale of how economic challenges caused her to accept $500 from the minor to have sex with him.

The mother of a 13-year-old girl told the Clarendon Circuit Court that selling sex to the minor was not intended even as she admitted that she works as a prostitute.

After pleading guilty to the charge of having sexual intercourse with a minor, Johnson told the court that she had her only child when she was 16 years old and had to assume various roles to take care of the child.

She said it was in 2012 that she experienced financial hardship and turned to prostitution.

The court was further told that on July 7, 2013, about 4 a.m., Johnson was in May Pen, Clarendon, when two males approached her with one asking, if she was "doing business".

She answered in the affirmative and quoted her price of $1,000. The money was paid and the transaction completed.

According to Johnson, she was then approached by the smaller of the two males who also expressed a desire "to do business" with her.

She told the court that she declined, at first, telling him he was a little boy, but he claimed that while he was small in body, he had graduated from school.

Johnson said the other male convinced her that he was telling the truth.

During the conversation, the boy said he had only $500. She took the money and went to the side of the building and had sexual intercourse with him.

While they were leaving, members of a police team arrived and arrested and charged her.

In his statement to the police, the boy admitted having sexual intercourse with Johnson for $500. He explained that he and his friends were at a dance in May Pen and when the police turned off the sound system at 3 a.m. his friends decided to go seek the services of a prostitute.

He said he accompanied them and confirmed the story told by Johnson.

In court, the boy's mother was sympathetic towards Johnson as she asked the judge not to send the prostitute to prison.

According to the boy's mother, the court should note that Johnson was conducting her business when she was lied to about the age of the minor.

A very penitent Johnson said she had never conducted business with children and would not knowingly do so.

The probation officer who handled the case conducted interviews with persons in Johnson's community and told the court that favourable reports were given about her.

In a social-enquiry report, the court was also told that Johnson "began to experience severe financial challenges as her clients often refused to pay her after she braided their hair. She no longer had her domestic job, and the coffee farm on which she worked ceased operation. She could not allow her child to suffer, hence she took the decision to enter into prostitution".

The probation officer recommended a suspended sentence with supervision for Johnson, and the presiding judge, Glen Brown, placed her on probation for three years.