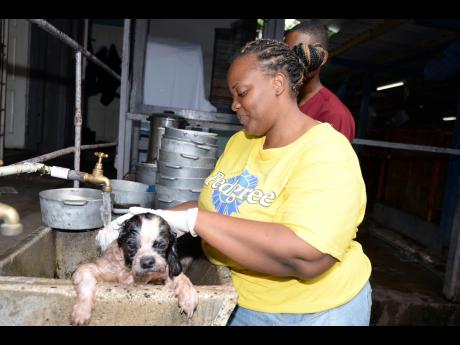 Jermaine Barnaby
Racquel Hylton tending to a dog at the current facilities of the Jamaica Society for the Prevention of Cruelty to Animals in St Andrew. 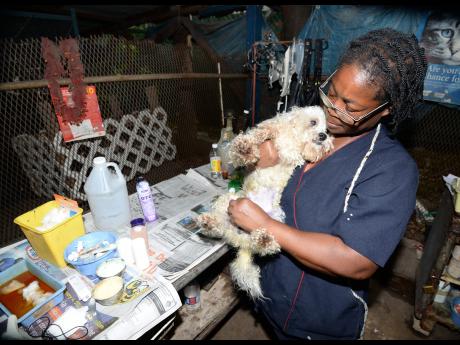 Jermaine Barnaby
Cherine ‘Ms Cherry’ Brady tending to a dog at the JSPCA. 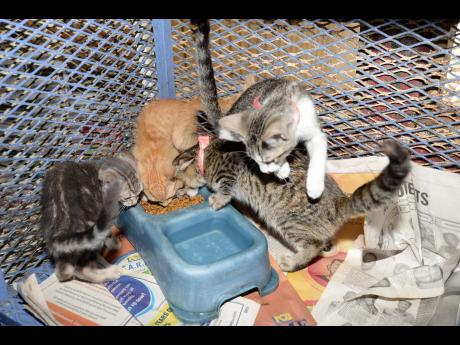 Jermaine Barnaby
Some of the kittens that might have to be euthanised if the JSPCA does not find a new location within the next month.
1
2
3

With around one month to begin the transition to a new home in order to be completely moved by its November deadline, the Jamaica Society for the Prevention of Cruelty to Animals (JSPCA) requires some serious assistance from the Jamaican people.

The Government has sold the Winchester Road location and the Supreme Court has ordered the JSPCA to vacate the premises.

A new home has still not materialised. Stray animals cannot be taken in because of lack of space, and finding space to board animals for trips has become a harrowing ordeal.

The JSPCA has even been forced to euthanise healthy animals because of the limited space now available at its current location.

"At this point in time, we are faced with a problem. It is not exactly pleasant to the eyes and the ears of a lot of people outside, but we have taken animals that are healthy that we have to put to sleep because of a space issue ... we can house so much and no more and the area cannot be overpopulated because this will lead to infection," said Dr Paul Turner, senior veterinarian of the JSPCA.

Pamela Lawson, CEO of the JSPCA, offered her perspective on the current situation.

She claimed that accessibility is the true key to the JSPCA's new home (if one is identified, hopefully with the help of the public) due to how many of the people bringing animals are those who cannot afford vehicles of their own.

"I have seen people come in on handcarts, they come on bicycles, or just walk in because it is so accessible here," Dawson said.

"My major concern is that ... if it is not accessible to those who cannot afford private transport."

If the new home isn't "off a major bus or taxi route", many people will be unable to reach the centre.

At this point in time, no perfect location exists, but Lawson is willing to take what she can get.

"I'm willing to take location over size ... we can always go up," she declared.

She explained that without animals being brought in consistently, there would be no animals to fill a well-sized centre. Size is useless without location.

Despite the severity of the situation, Lawson was not completely without hope. She was confident that the realisation that the JSPCA was completely out of time would inspire some last-minute salvation.

"We [the Jamaican people] usually like till wait to the ninth hour. We work best under pressure ... when we reach the 11th hour, I suspect something will happen."

Lawson stressed the importance of an effective JSPCA, noting that stray animals are an issue for Jamaica, particularly when it comes to how tourists perceive the country.

She claimed that tourism, "Jamaica's number one product," would be greatly damaged if there were no location to put stray animals.

"If we don't address the stray animal problem, it's not going to be a product."

Acknowledging that the Jamaican people have not totally abandoned the JSPCA, Lawson had nothing but praise for a group of young volunteers who plan to present the prime minister with a petition with as many signatures as they can muster to grant the society a plot of land.

While she has faith in the volunteers' efforts, Lawson insists that all of Jamaica must get involved to save the JSPCA.

"To be honest, there's only one way [for the Jamaican people to effect change]. They do have to rally in front of the Government!"