CARICOM must be heard - Phillips 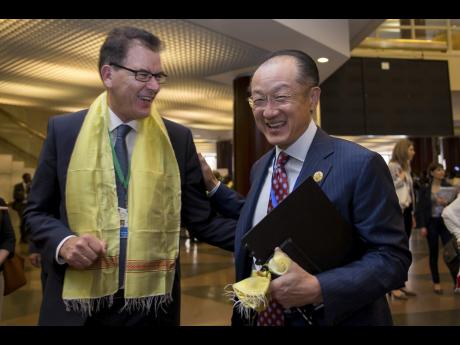 AP
President of the World Bank Dr Jim Yong Kim (right) reacts with Germany's federal minister of economic cooperation and development, Dr Gerd Muller, at The Third International Conference on Financing for Development, held in Addis Ababa, Ethiopia, yesterday. According to the organisers, the conference which runs from July 13-16 is intended to gather world leaders to 'launch a renewed and strengthened global partnership for financing people-centred sustainable development'.

Jamaica, Cuba, Guyana and Trinidad and Tobago are among the Caribbean island states that have taken prominent seats at the global round table at the United Nations' Third International Conference on Financing for Development in Addis Ababa, Ethiopia.

These 'small nations', and others in their category, are determined not to be ignored when the pie for funding of development projects worldwide is sliced up and dished out.

Finance Minister Dr Peter Phillips, who is leading Jamaica's team to the meeting, and who will speak on behalf of CARICOM, is very clear that the voice of the region must be heard.

"Our message is that the specific circumstances of the small-island states and vulnerable middle-income nations have to be taken in account," Phillips told The Gleaner in Addis Ababa yesterday.

"The value of this conference," Phillips asserted, "is in setting the agenda for how the world community is going to cooperate in ensuring that all countries can benefit from development, specifically to overcome the challenges of poverty."

According to Phillips: "Countries like Jamaica have to participate because of small size and limited influence."

Phillips, himself a man who has won the confidence of international partners and major financial agencies such as the International Monetary Fund, will sit in bilateral talks with head of the World Bank, Jim Yong Kim, and other global leaders while in Addis Ababa to reinforce the financial realities of Jamaica.

"What we want is to bring together the specific circumstances of the Caribbean as highly indebted, vulnerable to climate change, and still suffering from the negative effects of the crisis of 2008 and beyond."

He pointed out that Jamaica and the majority of its neighbours have continued to struggle since the global financial fallout without having received much assistance from the international community as a whole.

The plight of small nations and least-developed states was a recurring theme from the platform at the conference on yesterday's opening.

United Nations Secretary General Ban Ki-moon underscored the need to review and set new development goals, even as he cheered the progress made since 2000, especially in terms of poverty reduction and health care, plagues on developing and least-developed nations.

Ethiopian Prime Minister Hailemariam Desalegn, who is presiding over the event, affirmed the need for a new global partnership of peoples, governments and organisations. He lamented the lack of satisfactory progress in technology and agriculture and that greater focus needs to be placed on least-developed countries.

While the plenary and break-out sessions today and tomorrow will focus on how to find funds, set objectives and establish timelines, a question that might lurk in the corners of the minds of the national representatives in the Ethiopian capital is certain to be: Will any of this money for this development land in Jamaica's coffers?