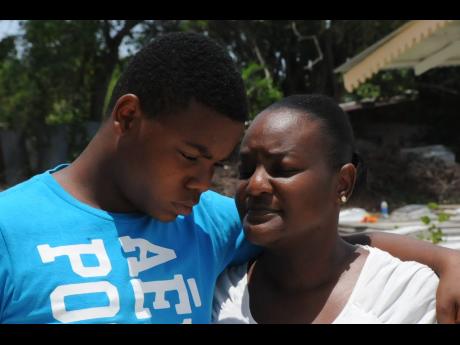 Paul Clarke
Shane Clayton (left), the twin brother of 14-year-old Shawn Clayton, tries to console his distraught mother, Retasha Carter, outside the Doyley’s Funeral Home in Savanna-la-mar, Westmoreland. Shawn was one of four persons murdered in Whithorn on Sunday.

The horrifying spate of murders rocking western Jamaica in recent months took another ugly twist in Glendevon, St James, yesterday morning when a young couple was slaughtered gangland-style and their house set ablaze with the bodies inside.

The couple, who suffered multiple gunshot wounds, were identified by neighbours as Shandel Edward and Chantel Wilson.

The killings, which occurred at approximately 4 a.m., are believed to have been sparked by a crime wave sweeping the once-volatile community.

"I was asleep at approximately 4 a.m. when banging, loud shouts and then a barrage of gunshots woke me up," a neighbour told The Gleaner. "Shortly after, I peeped outside and saw that the house was on fire."

While the police have not established a motive for the killings, based on information provided by residents, the violence started two months ago when a teenage girl was allegedly sexually assaulted by a group of young men, who forced her to perform oral sex on them. At least three of the persons implicated in the assault have since been killed.

The Glendevon killings come less than 24 hours after another horrifying incident in Whithorn, Westmoreland, in which four young men were shot and killed by three assailants while playing video games at a business establishment in the community.

Those killed in Whithorn have been identified as 14-year-old Shawn Clayton, a student of Knockalva High School; 20-year-old Romario Drummond; 22-year-old Theodore Tennant; and 16-year-old Demar Doeman, all of the Old Road District area in Whithorn.

When The Gleaner visited young Clayton's home yesterday morning, his twin brother, Shane, and his mother, Retasha Carter, were openly grieving as they lamented his killing.

"I will not have anybody to talk to anymore ... . He was my best friend and somebody whose company I always enjoyed," said Shane.

"My brother love video games and he spent a lot of time at the shop which they shot up."

A badly shaken Carter shed tears as she asked why anyone would murder her son in such a senseless way.

"They have taken away my son ... they have killed an innocent child, who just happened to be playing video games at a shop," said Carter. "Now they have left his twin to mourn him. How can a mother live with this?"