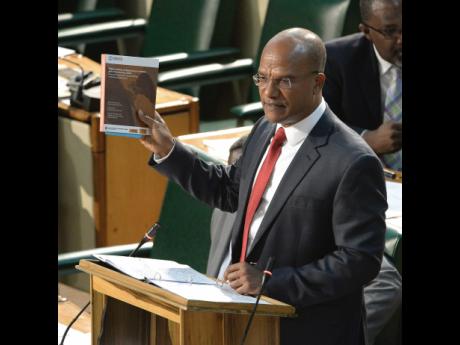 AS THE crime wave continues to rock the country, with more than 600 murders since the start of the year, National Security Minister Peter Bunting has announced new policy measures aimed at strategically reducing the galloping murder rate.

In a statement to Parliament yesterday, Bunting said that the Government was moving to make a substantial improvement in the operational mobility of the security forces over the next few months.

He told his parliamentary colleagues that 60 motor bikes had already been purchased for the Jamaica Constabulary Force (JCF) and would be delivered by the end of this month.

He said orders for 45 patrol cars, 27 pickups, four trucks, and three buses are in the final stages of the procurement process.

"This will be in addition to 22 vehicles already acquired in April 2015," he added.

In addition, the minister said the delivery of new protected mobility vehicles (PMVs) for the Jamaica Defence Force (JDF) had started.

Nine PMVs are scheduled for delivery this year.

Bunting said the acquisition of these rugged all-terrain vehicles would assist the JDF both in combating heavily armed criminal gangs as well as in disaster relief situations.

At the same time, Bunting revealed that a team from his ministry, including personnel from the Firearm Licensing Authority (FLA), the police force, and the Audit Department, had completed an audit of private firearms and ammunition stored in every police division across the country.

"On completion of each divisional audit, the firearms and ammunition were transferred to the FLA for safekeeping and ultimately for destruction," Bunting said.

According to Bunting, the exercise involved more than 5,000 firearms and tens of thousands of rounds of ammunition. He said the exercise had eliminated the possibility of leakage of these firearms into the illicit gun trade.

In his statement, the minister also said the Government had recently completed an upgrade of the Automated Fingerprint Identification System and the telecoms infrastructure of the JCF and work was under way to upgrade the 119 emergency call centre. It will cost the Government billions to carry out these upgrades, the minister reported.

target root cause of crime

Bunting also highlighted a raft of social-intervention initiatives he said would target the root cause of crime.

Yesterday, Bunting tabled The Maritime Drug Trafficking (Suppression) (Amendment) Act 2015, which seeks to grant the minister responsible for national security the power to waive Jamaica's right to exercise jurisdiction over Jamaican nationals who have been detained by law-enforcement authorities of a treaty state.

The parent legislation, which took effect in 1998, allows the minister to waive Jamaica's rights to exercise jurisdiction over vessels, cargo, and non-nationals but not over Jamaican nationals.

"It has been difficult to successfully prosecute cases when Jamaica has asserted jurisdiction over nationals," Bunting said.

He argued that with Jamaica located in the corridor between the main drug-producing and drug-consuming countries, collaboration with the country's international partners to prevent drug trafficking through the island's waters is an absolute necessity.