Jamaica gets millions in HIV funding 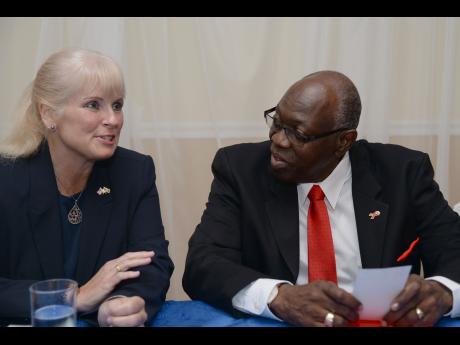 Despite news that surfaced last year that the United States President Emergency Plan for AIDS Relief (PEPFAR) had discontinued its funding of the Caribbean HIV/AIDS Regional Training (CHART) Network, the Ministry of Health on Monday announced that the Global Fund recently approved funding for the National HIV/STI Programme for the next three years.

Grant funding has also been approved under PEPFAR.

Addressing a press briefing regarding the approval of funding from the Global Fund and the United States Agency for International Development (under PEPFAR) for the National HIV/STI Programme, Health Minister Dr Fenton Ferguson said while there continue to be challenges, specifically among the most vulnerable groups, including female sex workers, young men under the age of 25 and adult men who have sex with men (MSM), the funding will go a far way to reduce the prevalence of the disease.

"We continue to face challenges with respect to the prevalence rate among our vulnerable populations," Ferguson said.

"In addition, men who have sex with men and their female partners accounted for almost 40 per cent of new infections in 2012. I want to further note that MSM who reported being involved in sex work reported an HIV prevalence of 41 per cent, transgender women 45 per cent, and transgender populations in sex work reaching as high as 56 per cent."

The minister added: "It is within this context that the Global Fund and PEPFAR have continued their long-standing support for Jamaica's HIV response. Both funding agencies will provide support geared at reaching those most at risk of becoming HIV infected, as well as those who are already infected through the provision of treatment, care, and support services."

He added: "The PEPFAR grant has already been approved by Washington, and we are now in the final stages of doing the Ministry of Health's work plan."

"We celebrate the fact that technical support and collaboration has reaped positive results and there is epidemiological transition in the HIV/AIDS response in Jamaica. A review of the data shows ... a reduction of deaths and prevalence among sex workers and mother-to-daughter transition," she said.