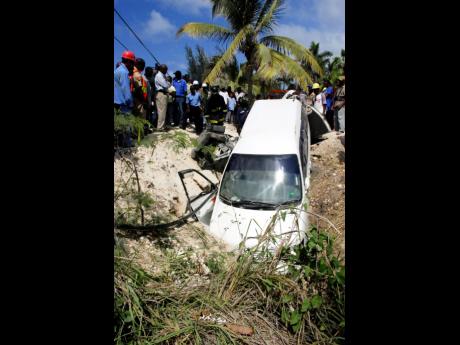 File
Onlookers view one of the motor vehicles involved in a three-vehicle collision along the Rose Hall main road in St James.

Loss of control has this year eclipsed speeding as the number one cause of fatal crashes.

He went on to describe incidents of loss of control.

“ Loss of control could range from a motorcyclist who doesn't know how to ride a bike or to a rickety old car or someone swerving in your lane, so loss of control is a very broad category.”

Lyew-Ayee indicated that there is a need to define loss of control more precisely.

“That is what we are looking at now. We are going back over the crash reports to try and tease more detail out of the reports,” he said.

The number one cause for fatal crashes in urban areas however is pedestrian behaviour and in rural areas it is highways and when we say rural areas, you can have long stretches of highways located in rural areas such as sections of Highway 2000.”

That 10-year study, completed in 2012, allowed MGI to create a baseline used to determine patterns and the different types of crashes islandwide, ranging from fender-benders to fatalities. This data, in addition to daily updates from the Police Traffic Division is now being used to provide real-time updates on the online fatal crash map.

Lyew-Ayee indicated that since the online portal was launched, its usage has spiked.