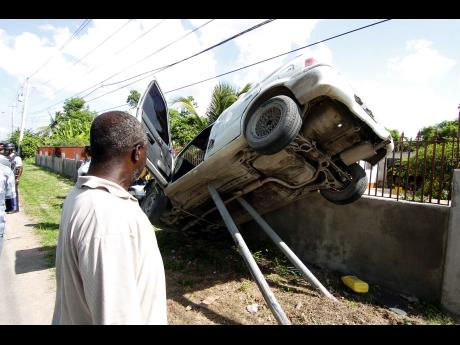 File
This man looks at a Suzuki Swift motorcar that was involved in a freak accident on Old Harbour Road in St Catherine. It was not clear how the car ended on top of this sign post.

With the number of fatal accidents since the start of the year pinned at 192, crash hot spots have become an area of focus for road-safety professionals.

A crash hot spot is defined as an area where two or more fatal accidents have occurred during one year.

Twenty-five such areas were identified in a study conducted by Director of the Mona GeoInformatics Institute (MGI) Dr Parris Lyew-Ayee.

The top six hot spots that were identified in the study included the Runaway Bay, Ocho Rios, and Rose Hall sections of the North Coast Highway; the Caymanas and Central Village sections of the Mandela Highway; and Old Harbour Road in St Catherine.

An initiative of Jamaica National General Insurance (JNGI) to erect signs that identify these hot spots has been aimed at creating behaviour change among motorists.

Thirteen such signs were erected in 2012.

At the recent launch of the JNGI Fatal Crash Map, an online portal that maps accidents in real time, Lyew-Ayee said that while it was still too early to draw concrete conclusions, the crash hot-spot signs seemed to be making an impact based on analysis done by the MGI.

Speaking with The Gleaner, Lyew-Ayee said: "We are seeing improvements in all but two. To be totally honest, we are not exactly sure if we are ready to declare victory just yet because it could be a multitude of factors happening, so we are still observing those signs, but we are seeking improvements in and around those areas."

Lyew-Ayee noted that a conclusion could not be arrived at on the impact of the signs given that the hot spots were determined after a 10-year modelling.

"It's not a hot spot one year then another year type of thing. We used to have this 'Keep It Under 300' campaign, and then as soon as we hit 300, we lowered it to 240. That was a bit premature because you really want to see if the pattern holds. You don't want to lower the bar as soon as you meet the target, so while we have reduced the numbers in and around those hot spots, I want to be sure that it's not a blip," he explained.