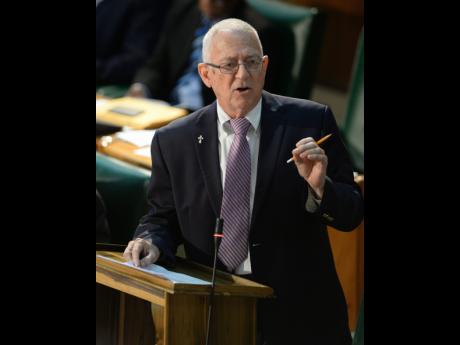 Education Minister Ronald Thwaites has revealed that his only regret in the wake of the reform of the ganja law in Jamaica is that to date, the Government has not rolled out a public-education programme in schools to dissuade youngsters from the harmful effects of smoking the weed.

In a statement to Parliament yesterday on the Safe Schools Programme, Thwaites said his position was clear in relation to the reform of the law, which decriminalises the use of two or fewer ounces of ganja, making it a non-arrestable offence.

He argued that the "criminal law was not an instrument appropriate for that kind of proscription as it was in the past, so I have no regrets there".

"What I do have a regret about is that we haven't yet mounted a programme of public education in our schools that points out - through our health and family life curriculum, through combination with the National Council on Drug Abuse - the kind of measures that will alert students from the earliest stages that smoking ganja will not improve your consciousness, will not make you more popular, and in fact is going to wreck your brain if you are not careful," he said.

"I pledge, and it is the mandate of the Government, I know, for us to tarry no longer in that regard and make sure that the appropriate steps are taken," he stressed.

The education minister had earlier pointed out that he was concerned about access to marijuana and other illegal substances in the vicinity of schools.

Thwaites reminded his colleagues that a survey done by the National Council on Drug Abuse (NCDA) indicated that of 38 schools, 50.4 per cent of the students reported how easy it is to obtain these substances in and around the school.

He said the Safe Schools team was developing a strategy to address the issue.

"Part of what we (NCDA) are doing now is a study to measure the usage to get an exact number for a comparative (analysis) following the relaxation of the laws. However, anecdotally, I am having more young patients coming to me with their parents saying that their children believe the new laws give them the right to smoke ganja, so that's what they are doing," De La Haye, deputy chairman of the NCDA, said.

He said the NCDA was taking steps to roll out a national public education strategy specifically targeting the younger population.

"The reality is that I am coming across some very serious cases of the negative effects of smoking cannabis, and at a higher rate than before. Although I am treating adults with this problem, a significant percentage are youth, and a lot are under 18. In fact, I am getting patients as young as 10 years old," he reported last month.

Under the new legislation, persons are now allowed to legally inhale the drug in the privacy of their residence if it is not being used for commercial purposes.

Additionally, members of the Rastafarian faith are allowed to smoke ganja for religious purposes in locations registered as places of Rastafarian worship. The smoking of marijuana is also legally permitted in places licensed for the smoking of the substance for medical and therapeutic purposes.

Under the Child Care and Protection Act, youth under the age of 18 are prohibited from partaking in the use of anything dangerous to their well-being, and an adult guilty of facilitating that can face serious penalties.