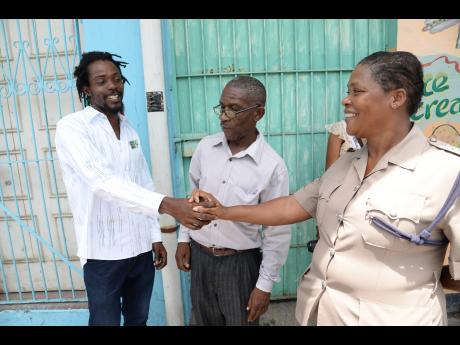 Jermaine Barnaby
Deputy Superintendent Lena McBean (right), head of the Community Safety and Security Branch for Kingston Central, in a delightful mood as she acknowledges Daniel Barnes (left) a beneficiary, of the CSJP Social Intervention Programme. Looking on is resource officer Carlton Powell. 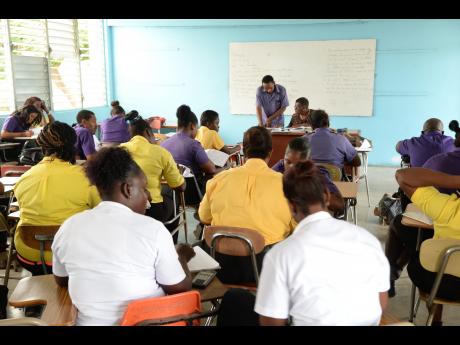 Jermaine Barnaby
Students in a classroom at Girls' Town. 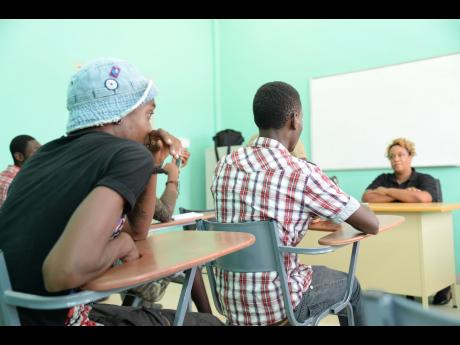 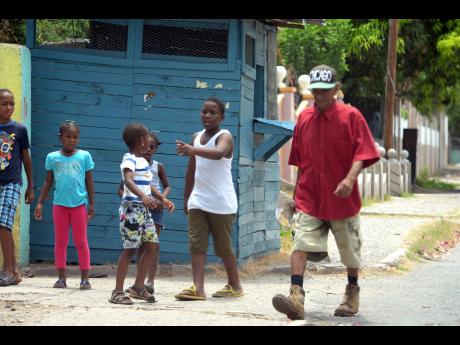 Jermaine Barnaby
Kids on the street in Waterhouse. 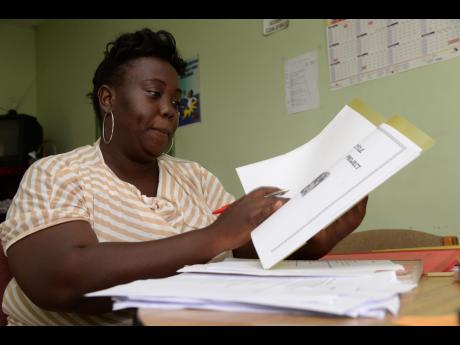 The Community Security and Justice Programme (CSJP) has been touted as one of the planks of Minister of National Security Peter Bunting's crime reduction strategy. The programme was started as a social intervention initiative that would address the root causes of crime in inner-city communities. One such community is Waterhouse in St Andrew. When a Gleaner team visited the community center yesterday, newly built through CSJP, residents expressed optimism about the activities that are set to be instituted there later this year.

"CSJP has made a lot of impact in Waterhouse because the young people in the community have now been engaged. We have training up by JDF (Jamaica Defense Force) headquarters as well as persons engaged as part of the Operation Friendship programme. Before that they were on the corner not doing anything but now they have something to do," said Kadane Russell, who is the CSJP community liaison officer.

"We have done a lot of work in the community, we have an active community development committee that meets every month and plans events and activities that bring the residents together, which has really helped to bring down the crime," she added.

Communications and Social Media Coordinator at CSJP, Patrice Tomlinson-Nephew, who guided The Gleaner team through communities in which the programme has been involved, noted that interventions are tailored to different age groups based on the risk factors.

"When CSJP started, we were looking at the 16-24 age group, as they were the main perpetrators and victims of crime. But then we realised that there were some issues with parenting, so we started to go into that. We also started the homework programme, and that was a means of getting the youngsters off the streets," she said.

Waterhouse residents who benefited from the JDF training in construction through CSJP indicated that they have been given a new beginning with the acquisition of a new skill. Hylton Litchmore, Keino Granvil, Troy Tyrel and Kevin Goulbourne said the programme has steered them away from a life of crime.

Goulbourne, who spoke on behalf of the group, said, "The CSJP programme at the JDF was a good experience for me. Me learn good skills so now mi can go look a work and come off the corner and just uplift myself."

In Parade Gardens, Daniel Barnes, a reformed gangster, said the CSJP programme has been a lifesaver for him.

"I was able to get a skill and earn a stipend when I attended classes in the CSJP programme and when I got that money, it was like a pay cheque to me, CSJP has really changed my life and a lot of young people in the community, because anyone who wants a skills is able to get it," he said.

Community, Safety and Security Officer at the Kingston Central Police Station, Deputy Superintendent Lena McBean, also attested to the work of the programme in addressing crime in the communities in which she works.

"The impact of CSJP has been massive, but one of the most important things I see them put on is the parenting sessions, because with the inner city, you have a lot of stuff that have to do with proper parenting," she said.

McBean added, "We have seen a reduction in crime for the past two years. Of recent, some likkle things a gwaan, but we have some intervention programmes dealing with that. The intervention has made policing much more easy."