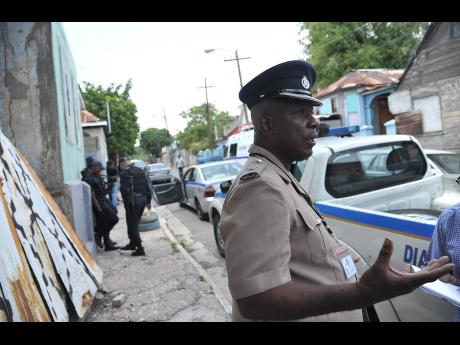 Norman Grindley
Michael Scott, superintendent of police in charge of Kingston Central Police Division, and his team at a crime scene on James Street in Central Kingston after a shooting yesterday.

Scores of suspected 'players' from hot spots covered by the Kingston Police Central Division were yesterday rounded up as crime-fighters stormed the areas on the first of a two-day operation.

"All hands are on deck but our hands are full; we have to find ways to cope with the shortage of manpower," said Superintendent Michael Scott, head of the division.

With the range of police vehicles seen in volatile areas throughout the division, Scott said: "We are just occupying space and hope to God (they) the gunmen get careless."

Scott said sections around the downtown commercial district, where gang war has become commonplace, have been on lock down.

But even with the best of will, the crime-fighters were unable to extricate children in the area from the grip of hoodlums.

Hours after crime-fighters carried out an operation on James Street, they had to head back as armed men stormed the area after they left.

At the James Street crime scene, a young girl, returning home from summer classes at the Calabar Infant, Primary and Junior High School, with an anguished look, begged the lawmen to see her through yellow tape that was plastered in the aftermath of a gang attack.

Asked why, the little girl told The Gleaner she was not allowed to walk on Smith Lane because "shot a fire".

An obviously frustrated Scott told The Gleaner that even as he and his team hunted gunmen, they were trying their hands at social intervention.

The division has initiated a summer-school programme at the Kingston Technical High School that accommodates more than 100 youth, age six to 18, from the warring communities.

Scott said the two-week programme would conclude today with a graduation ceremony which will coincide with a widescale operation in areas such as 'Spoilers', Tel-A-Viv, Parade Gardens and Allman Town.

"It is unfortunate that the focus is on the police when there is this absence of social intervention," said Scott. "We have held gospel concerts and other things just to keep the peace."