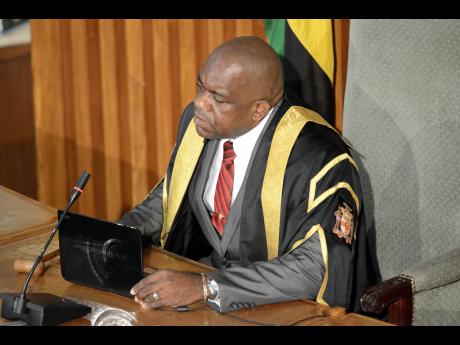 OPPOSITION SENATOR Robert Montague was the recipient of a stern rebuke and the threat of further action from Senate President Floyd Morris at the start of yesterday's sitting of the Upper House.

But Montague is not yet out of the woods as a clearly incensed Morris ruled that his senatorial conduct was continuously unbecoming and he would be pursuing the likelihood of taking further disciplinary action.

"I have reached my wits' end with your conduct," Morris told Montague as the two men wrestled over a slate of questions tabled by the Opposition.

The tension between the two men was palpable. As Montague struggled to make his position heard, Morris declared: "I have had it with you, and I am going to treat this one under advisement," asserted Morris.

When Montague sought to clarify his position, Morris would have none of it. "I will not allow the Senate to disintegrate ...," the president charged.

As Montague was forced to take his seat, he said: "I am not even being given a chance to apologise."

Earlier, Morris accused Montague of being disingenuous when the senator insisted that the questions that he and Senator Kamina Johnson Smith had tabled to the leader of government business instead of the substantive minister as was the custom should have received a response.

"I take exception to being labelled disingenuous, " said Montague. "It has been the convention that questions are channelled through the leader of government business."

But A.J. Nicholson, the current senate leader, dismissed Montague's claim. "There is no such convention either here or in the United Kingdom."

This sentiment was echoed by the senate president as he suggested that Montague had changed his tune midstream, which implied that Clerk to the Houses of Parliament Heather Cooke was not being truthful after guiding him on the status of the questions.

Morris got to his feet in an unusual stance as he declared: "I find you out of order!"