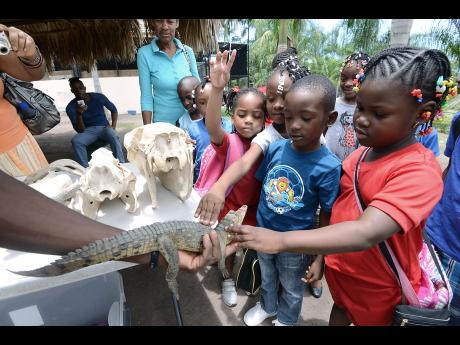 Ricardo Makyn
Students of Lyssons Basic School in St Thomas touch a small crocodile at the petting Zoo. They were being hosted by the South African High Commission at the Hope Zoo in celebration of Nelson Mandela Day.

THE CHILDREN from Lysson's Basic School and the Middleton Primary School in St Thomas were given a treat yesterday by South African High Commissioner to Jamaica Mathu Joyini.

The South African envoy gave the children a tour of the illustrious Hope Botanical Gardens and Zoo in St Andrew in recognition of Nelson Mandela Day, which is being celebrated globally today.

Joyini said that it was important to undertake the initiative as the gesture fits well with the former South African president's love for children.

The Gleaner accompanied the children and their teachers through the first half of their tour, which included the petting zoo, which took the children past the small aquariums of vividly coloured fishes and cages with monkeys and parrots.

The children viewed a table lined with skins, skulls, horns, and antlers from various animals. Two zookeepers came to greet the children, attempting to coax them from their tentative silence.

Shirley Douglas, a teacher who accompanied the students, noted that it was a grand opportunity to expose the children to Mandela's legacy while having fun.

"Mandela is one of the greatest, if not the greatest, to have walked this Earth based on my readings. The children are overjoyed, and we are so grateful to the commission for making the effort to engage the students in this manner," she said.

"My plan is to go even deeper into his teachings so that as a teacher, I can pass on the knowledge to the students because it is something that should be taught," Douglas said.

Similar sentiments were shared by Joyini, who noted that she was compelled to take on the initiative following her visit to the parish.

"We could have gone there (St Thomas), but I just felt that I needed to have them (children) come to Kingston and enjoy the zoo. Mandela would have wanted it no other way," she said.

"This is a perfect birthday gift, and I want to urge all Jamaicans to do their part to recognise Mandela's work and legacy. He wholeheartedly believed that everybody had the power to make a change and impact, and I, too, believe that we have to create opportunities to empower ourselves," Joyini asserted.

Many of the children did not know a great deal about Nelson Mandela, but some told The Gleaner that he was a man who stood up for the rights of black people in the face of adversity. To them, he was a role model who stood for justice and liberty.